Al-Manar airs footage of the Hezbollah attack on northern Israel 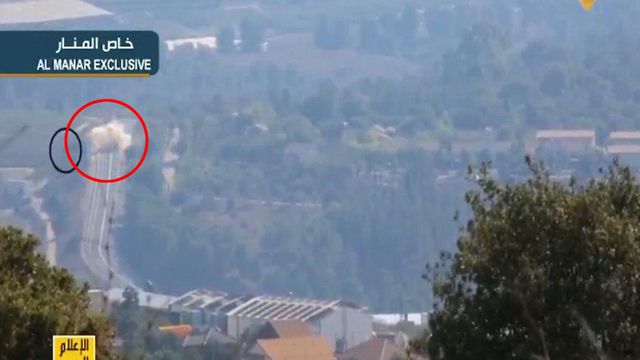 Al-Manar broadcasts video showing moment anti-tank missiles were launched to their impact on Israeli side of border; networks shows celebrations in southern Lebanon, claiming Iranian-backed group 'changed the equation,' and 'now Israel is the one who is deterred'

The Lebanese-based Hezbollah terror organization released footage Monday on its Al- Manar television network showing an attack on the IDF's Avivim base on the Israel-Lebanon border.

There were no casualties among IDF troops, who responded with massive artillery fire, although the army staged the evacuation of "wounded" troops to convince Hezbollah that it had hit soldiers in the field.

Al-Manar airs footage of the Hezbollah attack on northern Israel

The footage aired by Al-Manar was filmed from the position of the group that launched the Kornet anti-tank missiles and tracked them from their launch to the moment of impact.

The film focused on the Avivim base and the artillery troops who had actually been evacuated a few days earlier after tensions in the area spiraled.

The Lebanese channel named several soldiers serving at the base, in an apparent effort to display Hezbollah's intelligence-gathering abilities, and provided details about the base's commander.

The Al-Manar anchor even added that the two IDFs armored vehicles stationed at the base were lures for Hezbollah.

Prior to airing the footage, Al-Manar broadcast live celebrations over the attack in southern Lebanon, with Hezbollah flags being waved and activists using speakers placed inside cars to engage the crowd.

IDF artillery troops on the Lebanese border (Photo: AFP)
The reporter said the celebrations were for the "victory over the Israeli enemy," saying that "Hezbollah has changed the equation," and "now Israel is the one who is deterred." In the background there were cheers for Hezbollah Secretary-General Hassan Nasrallah and women could even be seen in the crowd wearing Hezbollah uniform.

Tensions on the northern border were sparked by a drone attack in a hezbollah stronghold in Beirut last week that the group blamed on Israel. They reached a peak Sunday when Hezbollah fired the anti-tank missiles at the IDF base and a military ambulance in the Avivim area.