Iranian President Hassan Rouhani at one of his country's nuclear facilities
Photo: AFP 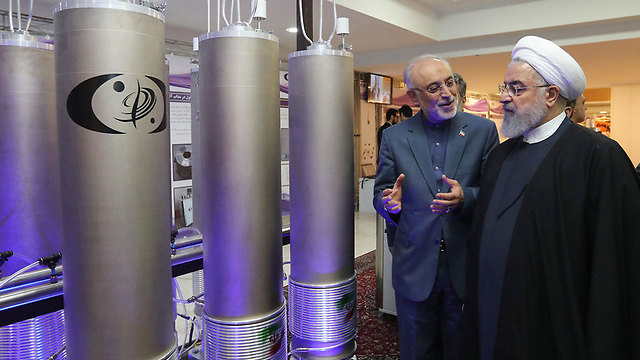 A senior Iranian official confirmed Wednesday that Tehran would return to its nuclear deal commitment only if it got $15 billion for oil sales over four months, as stipulated in a draft French plan to salvage the accord, the Fars news agency said.

France has proposed offering Iran $15 billion in credit lines until year-end if Tehran comes fully back into compliance with its 2015 nuclear deal, a move that hinges on Washington not blocking it.

Iranian President Hassan Rouhani at one of his country's nuclear facilities (צילום: AFP)
"Our return to the full implementation of the nuclear accord is subject to the receipt of $15 billion over a four-month period, otherwise the process of reducing Iran's commitments will continue," said Deputy Foreign Minister Abbas Araqchi. "Either Europe has to buy oil from Iran or provide Iran with the equivalent of selling oil as a credit line guaranteed by Iran's oil revenues, which in some sense means a pre-sale of oil," Araqchi added.

But Araqchi said there were still "serious disagreements on the agenda" of any future talks between Iran and its nuclear deal partners.

This adds to comments made by Iran's Foreign Minister Mohammad Javad Zarif on Tuesday, saying Tehran would further cut its commitments under the 2015 nuclear deal, unless European states acted to salvage the pact by Thursday, but that this did not mean the "end of talks", Iranian news agencies reported.

Zarif said President Hassan Rouhani would soon announce details of the cuts, according to the semi-official news ISNA. "Implementation of this step does not mean the end of talks," he added.