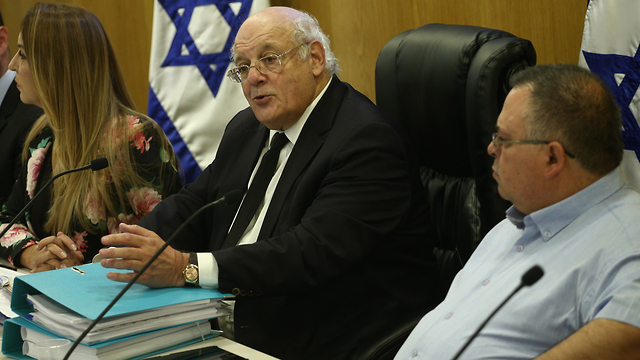 Elections Committee Chair: 'Cameras in polls will cause chaos'

Justice Melcer calls on MKs not to push for legislation to install cameras in polls and respect AG's position, saying that 'lately they haven't been listening to him'; 'the issue of cameras in polls needs to be legislated, but only after elections, not shortly before' - Melcer

Head of the Central Election Committee Justice Hanan Melcer said Thursday in a radio interview that he strongly opposes the Likud Party's bill to allow cameras in polls during the upcoming elections.

On Wednesday, Attorney General Avichai Mandelblit informed Prime Minister Benjamin Netanyahu and the Likud Party that their bill to legislate the installing of cameras in polls around the country is legally problematic and cited Melcer's earlier words on the matter, saying it would cause chaos and prevent some people from turning up at the polls.

Justice Hanan Melcer (Photo: Ohad Zwigenberg)
The Likud Party said in response that it rejects Mandelblit's position and will continue pushing for legislation on the matter.

Prime Minister Benjamin Netanyahu said Thursday morning as he left for a visit to London that "the position that the Attorney General presented is beyond explaining," and added that "we won't allow the stealing of the elections results."

The prime minister said that cameras are necessary in order to keep the integrity of the elections, and that the Likud Party encourages to install them all around the country.

But Melcer held his ground on Thursday: "I want to explain what the Likud's bill means," he said. "Any party or list would be able to install cameras of its own… Imagine that in some polls, there are more than 30 lists who are running (and will be present in the polls) …. 30 photographers in each poll will cause a huge mess."

So are you saying that, if this bill passes, you as head of the Election Committee cannot guarantee that we will be able to hold the elections properly?

The justice added that the current arrangement supplies a good answer to possible forging of votes.

"In certain polls we added a second voting station manager. Furthermore, we established a squad of 3,000 people with cameras, who will patrol all polls during election day, and if any problem arises, they would be able to instantly film with our permission."

"In problematic polls and in randomly chosen polls there will be filming throughout the vote count," Melecer said, and added that this solution was agreed on by all the representatives of the different parties in the election committee.

"I once ruled that the issue of cameras in polls needs to be legislated, but only after elections, not shortly before. You don't change the rules of the game (on a short notice). It is advisable that they listen to the Attorney General, lately they haven't been listening to him," Melcer said.

"I fear that if this bill passes there will be chaos, I call on all Knesset members not to promote this bill," Melcer concluded.

Joint (Arab) List Chair Ayman Odeh said in response that targeted polls in their Arab sector in the prior elections when Likud activists tried to film there, that "the only party that is being investigated for forging votes is the one who claims to keep the elections' integrity."

"Netanyahu wants the bill to be rejected, so that he can keep playing the victim of the judicial system and incite against the Arab sector," Odeh said.