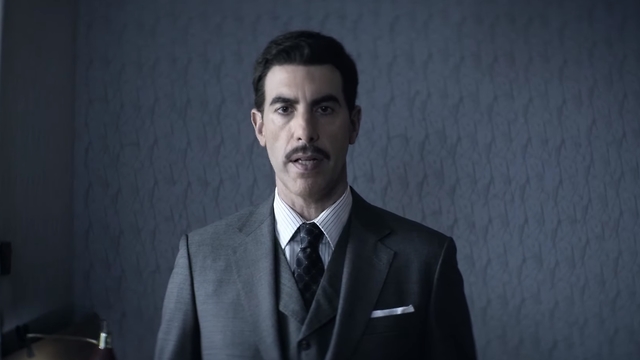 A story of Israeli heroism becomes an American cliché

New Netflix show starring Sacha Baron Cohen tells the life story of famed spy Eli Cohen who operated and was captured and killed in Syria, ignores the more complex side of events and offers viewers a show that is shallow, predictable and completely lacking creativity

Considering its young age, the early history of the State of Israel is laden with intriguing heroic tales with proven Hollywood potential. Most of them even come with a happy ending and a little boost to the national ego included.

Exodus, Entebbe, the Six-Day War, you name it. Maybe it's just the old Jewish habit to foster an ethos and maybe a necessity of reality, but it's all there, in the history books – just pick a story, get the funding and write a script.

"The Spy" is another piece of history that made it onto Netflix. It is based on the story of Israeli spy Eli Cohen, who was stationed in Syria, developed close relationships with the Syrian political and Syrian military hierarchy and paid for his dedication with his life after he was exposed and hanged.

One of the more interesting elements on "The Spy" is the presence of British Jewish actor Sacha Baron Cohen, who is playing Eli Cohen and who made a career for himself by portraying a slew of comedic characters, such as Borat and Ali G.

Like other comedians before him, Baron Cohen also tried to challenge himself with a dramatic role.

Eli Cohen operated in Syria under a false identity – Kamel Amin Thaabet. Cohen was so immersed in his character, that sometimes he would find it hard to break out of it whenever he went back to his real life.

"The Spy" requires Baron Cohen to get into Cohen's head, who in turn needs to get into Thaabet's head. As such, Baron Cohen needs to bring his own experience of assimilation into a character to his performce and the moments in which he reaches this goal in later episodes are some of the series' best moments. Unfortunately, even these moments don't reach the heights required for such a tale.

One problem with Netflix is that viewers are barraged by a deluge of shows that ultimately turn out to the same in essence. The Spy is a classic Netflix series in this sense - it lacks imagination and creativity.

On hand, a lot has been invested in the production and visuals. The show is well-filmed and laden with stars aside from Baron Cohen, inluding veteran Israeli actor Moni Moshonov and American actor Noah Emmerich.

Moni Moshonov (A still from the Netflix show)

On the other hand, the script, written by Israeli producer Gidi Raff, insists on clinging to old spy clichés and flattens his characters to the point of complete boredom. The result is a predictable show that tries too hard.

One detail (that is sure to make Israelis cringe) is that all characters – including Israelis and Arabs - speak English with a foreign accent, thereby creating ridiculous situations in which an Israeli character speaks English and then reads a document in Hebrew.

Sadly, instead of expanding our understanding of this story of bravery, patriotism and flawed humanity, "The Spy" simply joins other shows in which the true tale they're based on is the only thing holding them together.