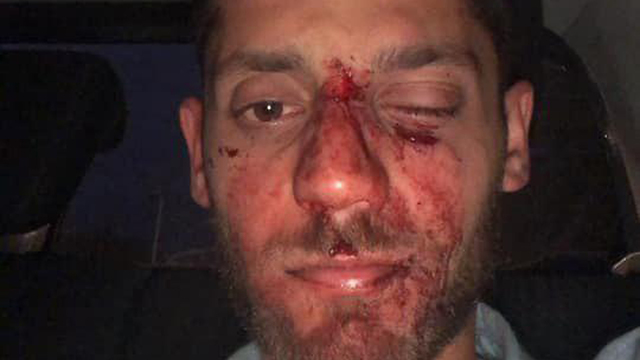 Barak, brother of one of the victims claims the attack was an act of terror adding the Arab group asked if the students were Israelis and when they said they were, began attacking them savagely

Israeli law students, on summer semester in Warsaw's, were reportedly attacked by a group of young Arab toursits outside a local night club.

Barak Kashpizky, the brother of Yotam Kashpizki, who was one of the victims of the attack posted on his Face Book page " my brother was attacked... allow me to call this a terror attack".

Yotam was attacked by a group of Arabs, not because he provoked or even spoke to them, he and his group were attacked only because they were Jews".

Yotam was attacked on saturday in Warsaw (Photo: Barak Kashpizki)

According to Barak, "An Arab speaking group of men turned to the students and asked them if they were Israeli, when they answered that they were, The Arab men attacked them savagely and one of them screamed "fuck Israel".

Barak posts continues by saying that Yotam got out of a cab he was in, to try and intervene and calm things down, one of the Arab attackers who most likely had a Knuckle- duster, punched Yotam and knocked him out.

Another friend who also tried to help, was thrown on a nearby parking car. When the attackers heard a couple of girls scream, they fled the scene.

Barak noted that none of the local onlookers lent a hand, " even the club's security did nothing to help, 2019, Warsaw, Jews are attacked, and the polish are doing nothing to help, history repeats itself".

The attack accured outside of the night club, "The View"

He blamed the Israeli embassy in Poland and the Israeli ministry of foreign affairs for not helping his brother, "they sent us to deal with the polish police ourselves, there wasn't even one Israeli representative present to help us, lucky for us and for my brother, he was helped by the college of management academic studies, and the head of his delegation, aid that the Israeli embassy didn't see fit to lend us. my brother was lucky, who knows who'll be next".

According to Israel's ministry of foreign affairs, the local consul, Menashe Kamara, was made aware of the attack on Saturday morning.

The consul offered help and made himself available to the Isareli students.

He also suggested they file a complaint with the local police.

"the event is well known to us, and is being taken care of, both by the ministry here in Jerusalem, and by the Israeli embassy in Warsaw". A foreign ministry spokesman told Ynet.

The two victims were released from hospital

Warsaw police announced they are investigating the attack.

"According to our investigation, 3 young men approached the group, one of them was very aggressive and yelled he was Palestinian. as such, we are treating this as hate crime", Warsaw police representative, Sylvester Marchuck announced.

and added, "there is no justification for violence, I believe the attackers would be apprehended soon" adding he wished Yotam and the rest a full recovery.