Boris Johnson and Benjamin Netanyahu on the steps of 10 Downing Street in London, Sept. 5, 2019 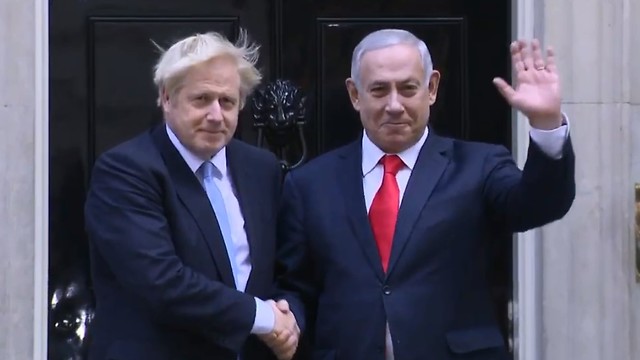 Netanyahu misspoke at Sunday cabinet meeting, referring to his British counterpart Boris Johnson as the former Russian president, but recording later released had dubbed over the gaffe

Prime Minister Benjamin Netanyahu's office has released a video that clumsily tries to edit out a gaffe where he calls the British prime minister the wrong name.

Cabinet ministers immediately corrected his error, which he then sought to turn into a joke, commenting that he wanted to be sure that they were all awake.

But an official video of the meeting released hours later suddenly cuts away from Netanyahu at the moment he says Yeltsin — instead he's heard saying "Boris Johnson."

The gaffe comes as Netanyahu fights for his survival ahead of next week's re-do election.

His campaign has branded the long-serving leader as a veteran statesman with close relations with world leaders.