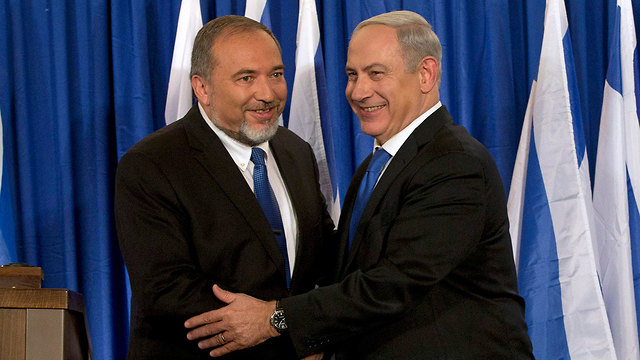 Analysis: Avigdor Liberman, a burly, tough-talking immigrant from the former Soviet Union, has emerged as political kingmaker ahead of next week's elections, one who could topple his one-time mentor Benjamin Netanyahu

Avigdor Liberman entered Israeli politics as a loyal protégé of Prime Minister Benjamin Netanyahu. Now, the maverick politician could be the one to topple his former mentor.

Liberman, a burly, tough-talking immigrant from the former Soviet Union, played a part in the events leading to Israel’s unprecedented second election of the year and is poised to be the kingmaker again.

Polls suggest Netanyahu won’t be able to form a coalition government without Liberman’s support, but his former mentee has played hard to get.

“I don’t have to join at any cost,” he told Channel 12 news over the weekend. “The prime minister’s policy is simply submission to terrorism.”

For years, Netanyahu and Liberman have had a roller-coaster relationship. Liberman, once Netanyahu’s chief of staff, has held a series of senior Cabinet posts and was often a staunch partner. But he has also been a rival, critic and thorn in Netanyahu’s side.

In a high-stakes gamble, he passed up the post of defense minister in Netanyahu’s government following April’s election, leaving the prime minister without a parliamentary majority and forcing the Sept. 17 do-over vote.

Their dispute, over what Liberman says is excessive influence of ultra-Orthodox religious parties, has become a central issue in the current campaign.

Liberman says he will insist on a secular unity government between Netanyahu and his main challenger, Benny Gantz, in order to push out ultra-Orthodox parties. But Netanyahu says his former ally’s real goal is to oust him from office, and Lieberman is suddenly discovering newfound support from those who hope he does just that.

“He is the only one who actually stood up to Netanyahu and didn’t bend over,” said Eli Avidar, a lawmaker from Liberman’s Yisrael Beytenu party.

“Liberman has known Netanyahu for 31 years. He knows the good and the bad and every angle you can imagine.”

The crisis that led to this month’s election ostensibly revolved around Liberman’s insistence that young ultra-Orthodox men be drafted into the military, like most other Israelis at the age of 18. But beneath the surface is a decades-long strained relationship between the two men.

The Moldovan-born Liberman started as a top Netanyahu aide in the 1990s before embarking on a political career of his own. But he resigned last year because Netanyahu kept blocking his plans to strike hard against Gaza militants.

“When I look at the Gaza Strip it’s unbelievable. The Hamas chiefs know they have immunity from Netanyahu,” Liberman said Saturday.

Liberman is often accused of racism for branding Arab lawmakers as enemies of the state and advocating for population swaps that would place many Arab citizens outside Israel’s borders. But he’s also shown signs of pragmatism, such as suggesting he’d be willing to dismantle his own West Bank settlement if Israel’s final borders were redrawn.

His secular agenda has made Liberman a favorite of Israel’s business sector, and his iconoclastic persona and straight talk — delivered in a slow, Russian-accented monotone — made him an unlikely savior for people tired of Netanyahu’s corruption-tainted, decade-long grip on power.

That’s despite the fact that Liberman survived a lengthy corruption scandal himself that exposed his links to shady characters and that allegedly earned his daughter mysterious millions.

“Oddly, the man who was a symbol for the secretive and conspiratorial politician, who runs his party undemocratically, is the hope of Israeli democracy and society,” communications expert Baruch Leshem wrote in a column in the Ynet website.

An irate Netanyahu has made it his mission to destroy Liberman politically, taking aim in ads and campaigning furiously among his core base of Russian-speaking supporters.

“Whoever wants a leftist government should vote for Liberman,” he said during a recent visit to Ukraine, which critics say he used to target Liberman’s traditional backers.

But the all-out assault has yet to make a dent. Polls show support for Liberman’s party has doubled since it came precariously close to elimination in April’s vote.

An emboldened Liberman recently met with top members of Netanyahu’s Likud party, reportedly discussing the chances of replacing the prime minister if he fails to muster a parliamentary majority. That fear seems to have propelled Netanyahu to demand a “loyalty oath” from party members, which Lieberman compared to practices of a North Korean leader.

Unlike Gantz, Liberman hasn’t officially ruled out forming a government with Netanyahu again, saying a broad coalition is needed to tackle urgent security challenges and lessen a deficit — which he blames on extortion by smaller religious parties. But he’s done nothing to dispel suggestions that he too wants Netanyahu gone.

“He’s a strategist, he knows how to play politics better than anyone,” said Ashley Perry, a former adviser.

Former officials affiliated with the center-left have been showing up at his campaign events. Liberman has been warmly welcomed in bastions of liberal Tel Aviv — until recently an unimaginable scene.

Avidar, the lawmaker from Liberman’s party, said a firm stance against Netanyahu on religious affairs has boosted the party’s wider appeal among secular voters who tend to vote more liberal, but said it remains firmly on the right when it comes to security and negotiations with the Palestinians.

“We are getting a lot of sympathy because people see that we are the only party stopping a Halachic state,” he said, referring to one governed by Jewish law.

Still, the prospect of Lieberman’s newfound crossover appeal is unnerving to those who have tangled with him before.

“Liberman may have decided that the Netanyahu era is over and that he will be the one to give the final twist of the knife. That would be a fitting end to a Shakespeare play, but what we’ve got here is an Israeli tragedy,” wrote Zahava Galon, a former leader of the dovish Meretz party.

“Liberman was and remains one of the shadiest and contemptible individuals in Israeli politics, and his belated legitimization only goes to show just how low we have sunk,” she wrote.