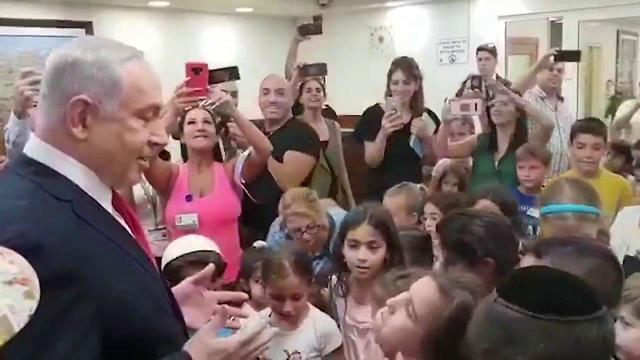 This election campaign has reached a new low

Opinion: Elections were never for those with refined tastes, but the feeling of disgust surrounding the upcoming vote is record breaking; there's no red lines left to cross, every conceivable demographic is a target for someone, and nothing is too petty for the candidates

Its not the indifference that's the problem, it's the sheer disgust of it all.

Like a beaten society, we've grown accustomed, accustomed to the idiotic idea of going to the polling stations yet again, because the stars didn't align for Benjamin Netanyahu and Avidgor Liberman in April.

Benjamin Netanyahu campaigning ahead of the elections next week (From Facebook)

We've grown accustomed to yawning in the face of more and more transcripts about cigars, champagne, dark dealings and corrupt news.

We've grown accustomed to everyone telling lies, for example:

Netanyahu warned us about a left-wing government and Netanyahu also tried to broker a deal with the Labor party.

Moshe Kahlon's party Kulanu is the sane moderate right-wing, until it gets swallowed up by the Likud, from whence it came.

Liberman swore to form a right-wing government, and recommend Netanyahu for prime minister, just as he swore to take out the head of Hamas, Ismail Haniyeh.

Israel is preparing for another round of elections in 2019 (Photo: Eran Granot )

Benny Gantz promised the ultra-Orthodox sector everything they could ever want, and also promised to form a secular government.

More and more hollow words are produced, and none really expects us to believe that they're sincere.

Amir Peretz even shaved off his decades-old mustache just so we'd believe he was telling us the truth.

But all these obscene habits, the ennui, the indifference, the eye rolls - that's the easy part.

The hard part to stomach is the feeling of nausea.

The elections were never for those with refined tastes, but we still had the spiritual willingness to go and do our civil duty.

Voting for those who reflect our beliefs in the least twisted way is a hell of a task, but still the feeling of civic duty sustained us as we stepped into the voting booth.

After voting, we'd make plans for a BBQ with friends and wait for the aerial demonstration, even though it wasn't Independence Day, because despite it all, the feeling of civic duty created a feeling of accountability.

Then we watched the election results come in and either cursed or cheered.

It was all part of the national holiday we called Election Day. Except this time, there is no celebratory atmosphere.

Cameras were pulled from thin air to scare certain communities or maybe just to frighten a certain attorney general, or maybe to get us all to talk about the things they want us to talk about.

Entire campaigns whose sole purpose was to blacklist certain communities were organized: rabbis are the devil; members of the LGBTQ community are perverts, Arabs are locusts; and the Supreme Court is an institution that needs to be dismantled.

Even the small parties who attract mainly niche or protest votes have vanished.

No more Zehut, no more Ale Yarok, no more Am Shalem and no more U'Bizchutan. They were all swallowed by bigger fish.

All we have left now is the Pirate Party, and the Nachman Meumans.