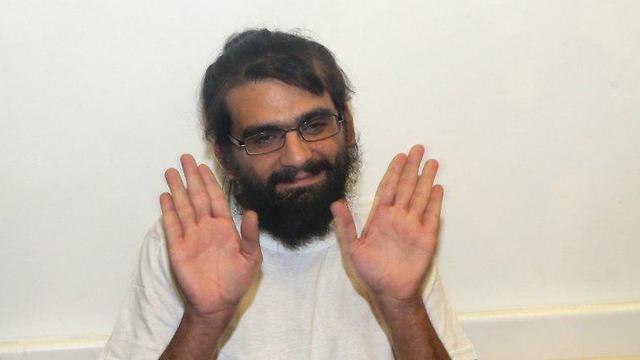 Telegrass founder Dov Amos Silver greeted with cheers and applause as he appears in Lod District Court to face multiple charges; suspect to remain in custody until end of legal proceedings

The Israeli behind the creation of a massive online drug-dealing network was charged Monday with running a criminal organization, trafficking in dangerous drugs, providing narcotics to minors, blackmail and making threats.

Amos Dov Silver, the founder of the Telegrass network on the Telegram instant messaging app, was charged by the cyber division of the State Prosecutor's Office. He appeared at Lod District Court to hear the charges against him, and was greeted with cheers and applause by spectators.

Judge Ido Druyan-Gamliel ruled that Silver must remain in custody until the end of legal proceedings against him and set his next court hearing for October 23.

According to the prosecution, Silver "worked to encourage the use of cannabis through his Facebook page, and produced events where dangerous drugs were given to participants."

Silver's lawyer Uri Corb said in response that, "Amos' actions were ideology driven. He's a morally and ideologically driven man who believes both patients and the underprivileged should be helped and their suffering eased" by cannabis.

He added: "The indictment was predictable and acts as further proof of the authorities' overzealous conduct in Silver's case. The claim that Amos Silver is running a criminal organization is absurd; Silver will fight for the values he believes in, and will prove himself innocent in court."

Silver himself once wrote a letter to the police saying that, "the concept of Telegrass is to help those who use cannabis for medicinal or recreational purposes, and to help the needy purchase the plant withoput encountering criminal elements. Your trampling of my basic human rights to get me convicted for a crime I did not commit will not work."

Silver was arrested in March in the Ukraine city of Uman and was extradited to Israel soon after.

As part of the case, which the prosecution dubbed Case 420 - a reference to a number prominent in cannabis culture - criminal charges were filed against 28 additional employees and managers of the network.

"The heads of Telegrass were responsible for providing drugs to more than 200,000 people around the country, an unknown number of them underaged."

According to the prosecution, the Telegrass staff and managers used bots to maximize their profits and reach more than NIS 30,000,000 (approx. $8.5 million) in revenue.