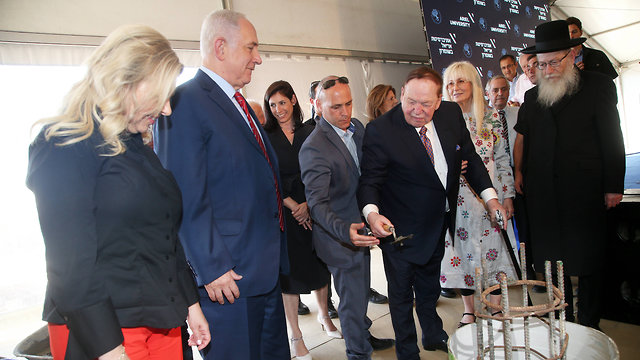 The politics of power, corruption and insatiable greed

Opinion: The wife of the prime minister of the State of Israel should be thrilled with the endless positive coverage provided by Miriam Adelson and her billionaire casino mogul husband, but it seems that it is never enough - and the benefactors have no one to blame but themselves

Sara Netanyahu is the kind of person to be given an inch and expect a mile.  In that respect, at least, she is far more honest than some of her detractors.

This aspect of her character was on full display this week when Channel 12 journalist Guy Peleg presented tidbits from the various corruption investigations into Prime Minister Benjamin Netanyahu and his family.

In her testimony to police, Miriam Adelson, the wife of Sheldon Adelson and co-owner of the pro-Netanyahu Israel Hayom daily, said that the prime minister and his wife made frequent demands about the coverage they received in the newspaper. Sometimes Sara's picture was not big enough or flattering enough, or in the wrong place and not prominent enough.

Sometimes a positive news item about the couple was cut short or pushed further down the page, on its way to be printed.

And sometimes milady hinted she would be happy to receive an expensive piece of jewelry from her billionaire friend.

Adelson lamented to investigators that she could not take the screaming. At times, she told them, she just put the phone down on the floor and away from her ear. She was still able to hear what Mrs. Netanyahu was saying.

"Saraleh" she would tell her, " I have a casino license. I cannot give the wife of an elected official any gifts."

This testimony exposes Mr. and Mrs. Netanyahu in all their whims: Their obsession with press coverage, their impossible demands, their insatiable appetite for gifts, the screaming. All of them familiar to the public from Case 1000, which involves alleged receipt of illicit gifts from wealthy benefactors.

Peleg, a qualified journalist, was keen to reveal the narrative. That is his job.

One woman slinging mud at another makes for good headlines, it makes the viewers roll their eyes and feel good about themselves. Especially when one of the women is immensely rich and the other immensely powerful.

I saw this clash of characters a little differently.

An American Jewish billionaire by the name of Sheldon Adelson, who owns many casinos in many countries, decided to get involved in Israeli politics.

He had a vision, an agenda and deep pockets, and 12 years ago, he and his wife founded a free daily newspaper to be distributed all over Israel.

The couple saw Netanyahu as the right person to carry out their vision, their political agenda, and embraced him whole heartedly.

The free paper was seen for what it was, a platform for the Adelsons' campaign to promote the Netanyahu personality cult and a loud crusade against his opponents.

It was never a newspaper. Not every rag printed with a crossword puzzle and Sudoku can be mistaken as such. It was an election gift for Netanyahu.

Hundreds of millions of shekels were invested by the Adelsons in the Netanyahus. Anyone else given such an opportunity would say thank you, but not Sara Netanyahu.

To the wife of the prime minister of the State of Israel, the people who work for her must be totally committed to serving her. Be they Sheldon Adelson, the caretaker at the official residence or her office manager - they are all the same in her eyes.

At least she in consistent, I suppose.

From the beginning, the Adelsons published stories about the Netanyahus that were meant only to flatter them, so it is hardly surprising that this is what they expect all the time.

Why shouldn't Mrs. Netanyahu expect to receive editorial discretion? Why should she not expect her demands to fire a journalist be met by Mrs. Adelson?

Israel Hayom has not transformed into a bona fide newspaper even if its owner is on the receiving end of Sara Netanyahu's ear-shattering ire.