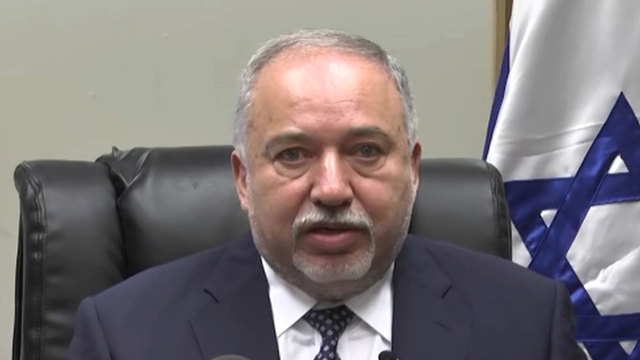 According to Liberman, low voter turnout will ensure Netanyahu's victory and he will be stopped only if the Israeli public is concerned enough about an extreme right-wing and religious government to show up at the polls

Yisrael Beytenu Chairman MK Avigdor Liberman said Wednesday that he believes Netanyahu will win the upcoming elections and establish a narrow right-wing government with "the haredim and the messianics".

"The picture being painted is very worrying for us. Our predictions show clearly that the right-wing bloc will get 61-62 seats," said Liberman in an interview with Ynet sister publication Yedioth Ahronoth.

"Last time, if Netanyahu was one seat short, then this time, he has more than enough seats. Netanyahu will have at least 61-62 seats and he will form his halachic government."

According to Liberman, only a 70% voter turnout in anti-Netanyahu strongholds or higher could prevent the current prime minister from coming out on top and establishing a religious-right government.

"Only the seculars, the traditionals and immigrants can prevent the formation of an extremist government, especially in central Israel. If voter turnout in central Israel doesn't surpass 70%, then Netanyahu will certainly form the next government. Liberman warned adding "all the laws he wants, will be passed within a month".

In Liberman's opinion the Blue and White Party  will fall apart and some of its members will join Netanyahu's government.

"This will be the worst government since Israel's inception. A government bordering on insanity." Yisrael Beiteinu leader concluded.

Liberman said that these elections were already decided and that he is preparing himself for a further round of elections within a year and a half, after Netanyahu's government collapses.

"This government will not last too long. It will collapse within a year and a half and then we will have to go to elections once more." he projected adding none of the countries pressing problems will be solved by such a coalition.