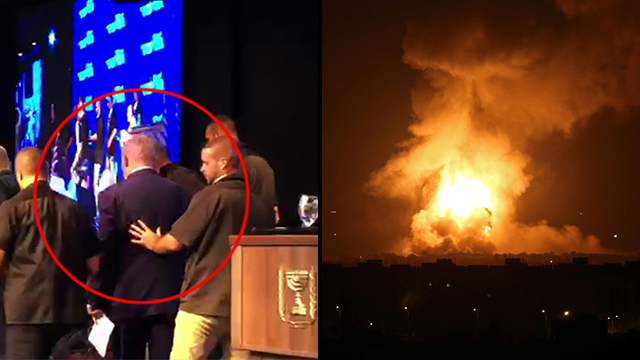 Netanyahu's annexation pledge proves he puts his own welfare above Israel's

Opinion: The prime minister's announcement that he plans to annex the Jordan Valley and northern Dead Sea is nothing more than an attempt to win more votes, but such declarations only serve to hurt Israel, even more so than the Gaza rocket fire that forced him to seek shelter mid-speech in Ashdod

Israel took two hits on Tuesday, one in the form of rocket fire from the Gaza Strip that forced Prime Minister Benjamin Netanyahu to flee to safety mid-speech in Ashdod.

The other, more substantial hit was Netanyahu's declaration he intends to annex the Jordan Valley should he win next Tuesday's elections.

There is indeed a certain consensus, from the Democratic Union with its Meretz leadership all the way to the far-right of the political spectrum, that the Jordan Valley remains in Israel's control under any peace agreement with the Palestinians.

An election statement like the one Netanyahu made on Tuesday only serves to hurts this consensus, as it turns the Jordan Valley into a political issue and ignites old disputes.

Over the last three decades, many peace initiatives have been discussed. The Palestinians said no to all of them, including those that offered them partial or complete control of the Jordan Valley.

In such a situation, Israel could use the Palestinian stubbornness to justify its hold of the Jordan Valley. It is far from an ideal situation, but under the current circumstances on the international stage, and taking into account the fact that the Palestinians will never agree to a compromise, it is the least worst option.

And so, what did Netanyahu do? Well, he didn’t do anything to help Israel keep hold of the Jordan Valley, instead he actually gave away Israel's justification to the world for continued control of the area.

So ultimately, this move is only detrimental to Israel.

If before Tuesday there was no real international front to dispute Israel's hold of the Jordan Valley, now there certainly will be.

At the the beginning of 2001, when the peace talks in Taba were taking place, the Likud was furious at the very idea of the negotiations, even though they led nowhere.

On Tuesday, Netanyahu took a much more dangerous step, showing a willingness to hurt Israel's national interests in the hopes of mustering a small political advantage - something he is actually unlikely to achieve.

After all, no one from the left or the center will think about switching to the Orthodox, right-bloc in the wake of Netanyahu's statement.

So, what’s left for Netanyahu? Just a hope of syphoning more votes from other right-wing parties.

For last few days before the elections, the Likud leader going to move more and more to the right, aiming to take votes from Ayelet Shaked's "Yamina" party.

Throughout most of Netanyahu's rule, he has shown national responsibility, that the national interest was more important to him than personal interest.

But now, that is not the case. Something terrible has happened to him in recent years.

For example, he knew proposed legislation to retroactively legalize all West Bank settlements was bad for Israel, but he persisted with it anyway, because that's what far-right MK and minister Bezalel Smotrich wanted, so that’s what Netanyahu delivered.

Now, the specter of the proposal is being revisited, because that's what Smotrich wants, and that's what Netanyahu delivers.

At the end of the day, it's not clear if Tuesday's announcement will benefit Netanyahu.  What is clear though, is that it will hurt Israel.