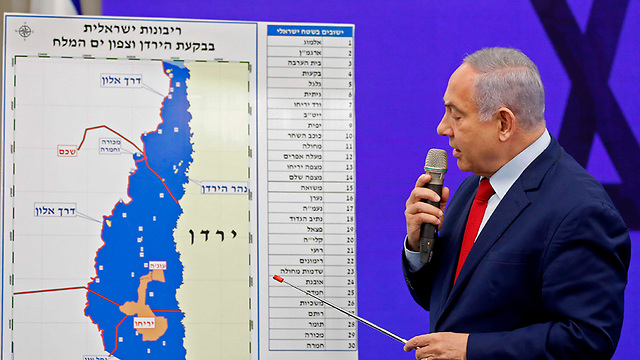 Netanyahu comes under fire after presentation of plans to annex Jordan Valley if he wins next week's elections, Arab leaders deem it 'aggression' undermining chances of peace settlement with Palestinians

The Arab world has denounced Prime Minister Benjamin Netanyahu’s plan to annex a large swathe of the West Bank, if he wins the closely contested elections that are less than a week away.

The strongly worded statement is a significant rebuke from a regional power that has recently grown closer to Israel over shared concerns about Iran.

Netanyahu said Tuesday he would extend Israeli sovereignty over the Jordan Valley if he was re-elected next week and would move to annex Jewish settlements.

Around 65,000 Palestinians and 11,000 settlers live in the Jordan Valley and northern Dead Sea area, according to the Israeli human rights group B'Tselem. The main Palestinian city is Jericho, with around 28 villages and smaller Bedouin communities.

It was widely viewed in Israel as a campaign stunt and initially received a relatively muted response in the Arab world, where championing the Palestinians has waned.

Saudi Arabia's royal court, which runs the affairs of King Salman and Crown Prince Mohammed bin Salman, says other regional concerns "will not affect the status of the Palestinian cause."

Arab foreign ministers also condemned the plan as "aggression" undermining any chances of a peace settlement with the Palestinians.

"The Arab League considers his (Netanyahu's) announcement a dangerous development and a new Israeli aggression by declaring the intention to violate the international law," read an official statement by league after a meeting in Cairo.

"The league regards these statements as undermining the chances of any progress in the peace process and will torpedo all its foundations," the statement said.

Hanan Ashrawi, a senior official in the Palestine Liberation Organization, wrote on Twitter that the Israeli leader was out to impose a "greater Israel on all of historical Palestine and carry out an ethnic cleansing agenda".

Qatar reiterated its support for a two-state peace solution.