A police sapper at the scene of Wednesday's rocket strike
Photo: Israel Police 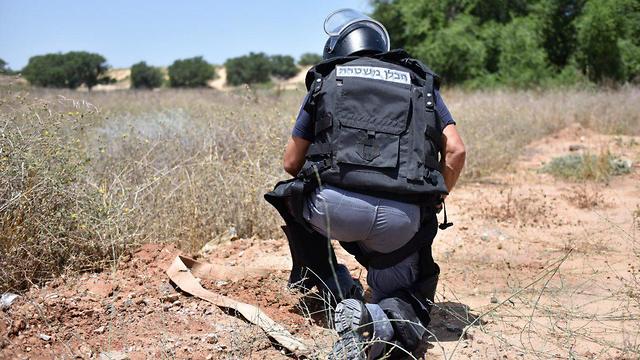 A rocket fired from Gaza struck the garden of a family home in Hof Ashkeon Regional Council on Wednesday afternoon, during a fresh barrage from the Strip. Minor damage was reported to the home, and there were no injuries.

The sirens sounded at around 2pm, as students in the area were attending lessons in their reinforced classrooms.

A police sapper at the scene of Wednesday's rocket strike (Photo: Israel Police)

The Israel Defense Forces said that three launches at Israeli territory had been detected from Gaza.

In response to the attacks, IDF artillery troops struck two Hamas military posts close to the perimeter fence in the northern Gaza Strip.

The Magen David Adom rescue service said it had not received any emergency calls in the wake of the strikes.

Hof Ashkelon Regional Council said that a strike had been detected in one of its greenhouses, and police sappers were called to the

The Israel Air Force attacked some 15 terror targets in the northern and central Gaza Strip overnight, including a weapons production facility, a military compound belonging to the Hamas naval force and an attack tunnel.

The airstrieks were carried out in response to rocket fire hours earlier on the southern cities of Ashdod and Ashkelon.

Prime Minister Benjamin Netanyahu, who was giving a campaign speech at the time of the rocket strikes, was rushed to safety by his security detail.