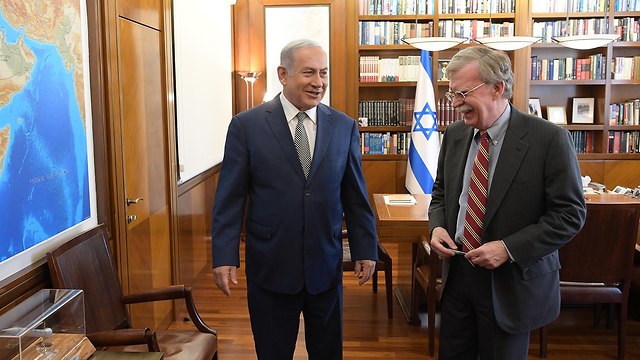 Analysis: Trump's decision to cozy up to the Iranian regime worsened already tense relations with his national security adviser, but the president is desperate for a win on the international stage even if means going against his friend and confidant Benjamin Netanyahu

The original sin was the manner in which U.S. President Donald Trump appointed John Bolton to the coveted job of national security adviser.

The president could not stand Bolton. His famously bushy mustache disgusted him, he saw him as a man of bells and whistles, and Trump always needs the stage to himself so that he alone, can create a cacophony.

But the Republican Party pressed him on it, and Trump acceded.

After a brief honeymoon, every encounter between them was a clash. In Trumpland, the president sets the tone, but Bolton, like a mini-Trump, strode the corridors, banging his own gong: regime change in Tehran and bombing Iran; flattening the Taliban; smashing Hezbollah; crushing Hamas; deploying forces towards North Korea.

It's not for nothing that Bolton earned the reputation of warmonger. He believed that Kim Jong Un was leading the president by the nose and that the Taliban was making fun of him.

Trump has also said similar things in the past, but what is permissible for the president is not acceptable when uttered by someone supposed to be a tool of the White House.

The tensions between the two had worsened in recent weeks as Trump began courting Iranian President Hassan Rouhani, even saying he would love to meet him without preconditions.

Trump has already begun his reelection campaign, and this month his support in most polls reached a low of 38 percent.

He is desperate for a win on the international stage; he thought his friend in Pyongyang would deliver the goods, but that did not work out. Now Trump is eyeing the Ayatollah, to the displeasure of both Bolton and his good friend and confidant Benjamin Netanyahu.

Bolton knows only one form of behavior when dealing with the enemy: an iron fist and tough words.

Trump had a similar approach until he realized it was tantamount to planting landmines in his path to a second term.

The Americans, many Republicans among them, are not only angry at the president's bullying behavior but also feel ashamed that he has become the face of their country.

Trump has stated that he likes to rule from chaos, and at first he quite enjoyed the loud battles between Bolton and Mike Pompeo, his beloved secretary of state and former CIA chief.

On one occasion, the two reached such strident tones during an argument and stood so became frighteningly close to one another that their aides had to separate them.

Pompeo is Trump's yes man, but he also has an agenda: He is loyal to the president because he is the one who appointed him as America's top diplomat and put him in an entirely new league.

Pompeo has ambitions to run for president in 2024, and his strategy is to flourish at the side of the president - for now.

Trump, who pulled the U.S. out of the Iranian nuclear deal mainly because he wished to erase Barack Obama's great achievement, is now sending the ayatollah messages of reconciliation.

But the Iranians are not stupid, they will only agree to meet Trump if they are sure they will get something from him in return. They don't need a photo opportunity like Kim Jong Un.

Bolton's departure more than anything signifies Trump's about face on Iran, which brings a new direction at the White House.

It also means that Netanyahu no longer has anyone in the White House who sees Iran as he does and who can whisper in the president's ear all the messages he receives from Jerusalem.