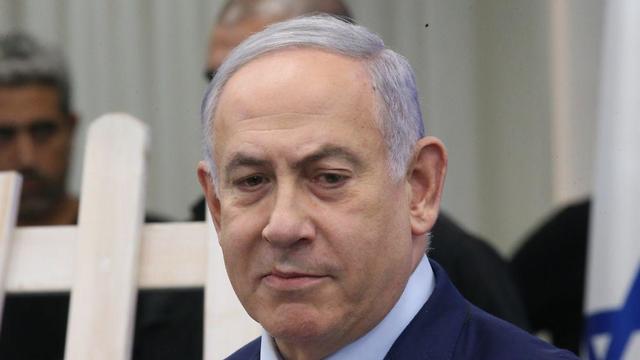 Opinion: On Tuesday, Israelis vote in national elections for the third time in a row because of the personal and criminal interests of a single man, Prime Minister Benjamin Netanyahu

In the past, one of the local newspapers ended an article with the question, "Is Benjamin Netanyahu an Israeli patriot?"

The prime minister said in response that out of the numerous lies and slanders that have ever been written about him, none offended him like that particular question.

In that case, he was probably being truthful, because if every nation has the right to define itself, surely every single person has the same right.

If for example, a man believes that being Israeli is his entire being, who among us can argue? Even if you use the man's biography and track record to prove otherwise, it's not humane to dispute such a claim.

What you can safely say is that when Netanyahu needed to choose between his own interests and our national interests, he was never confused, and never leaned in our favor.

Next week, the Israeli public will go to the ballots for the third time in an election dictated by the personal and criminal interests of one man.

The entrance to a polling station in Petah Tikva on the first Election Day of 2019 (Photo: Tomeriko)
The first time we went to the polls was to save his daily newspaper, the second time was to outrun the criminal suspicions he is facing, and now, the third time, it's to stay one step ahead of the hearings regarding his alleged corruption while in office.

He's coming to these elections having tried every trick in the book to sway the vote - the camera bill, Iran, annexation and so on.

As part of his recent drive to dominate the pre-election news, Benjamin Netanyahu, as the national reporter for defense affairs, revealed the existence of an old nuclear site in Abadan in Iran.

Netanyahu has his own concept of what constitutes classified information - selling submarines to Egypt was a state secret he did not see fit to share with either the IDF chief of staff or the defense minister, but information of thus nature is great for a press conference revelation.

Intelligence such as the Iranian nuclear site is something you're supposed to share secretly with the International Atomic Energy Agency, and covertly supply to friendly intelligence agencies.

After all, what are members of the Likud supposed to do with this information? Fly to Tehran, catch a bus to Isfahan then hike to Abadan to take a few pictures of a nuclear site that's not even there anymore?

Imagine if you will, that its September 2007 and the prime minister isn't Ehud Olmert, but Benjamin Netanyahu, and he receives the information about a nuclear reactor being built in Syria.

Then, one clear and crisp day, his office announces that they're hosting the most important, never seen before, dramatic press conference.

Netanyahu the magician goes on stage, and in an impressive juggling act points at a picture of the reactor sitting in Deir al-Zor, pulls a small vial filled with sand from the reactor that proves the presence of uranium in the area - sand that he, by the way, "instructed our soldiers to retrieve."

Public opinion polls would reward Netanyahu with 50 Knesset seats, and the Syrian nuclear reactor would have gone online in a few short months.

Netanyahu's strategy on Iran, which will experience a symbolic collapse the day Netanyahu's friend U.S. President Donald Trump meets with his Iranian counterpart Hassan Rouhani, will most certainly justify the need for an Israeli state inquiry.

Netanyahu's other "friend," Russian President Vladimir Putin, helped save Syrian President Bashar Assad in Syria, who in turn gave the Iranians privileges and supplied them with the opportunity to spread their tentacles along our shared border.

But the clever Putin has figured out how Netanyahu ticks - simply supply him with a couple of good photo opportunties and you can do as you please.

If Netanyahu wins, and I'm one of those who believe he just might, he'll try to undermine the very foundations of the law enforcement and justice systems, just so he can avoid his upcoming criminal prosecutions.

But if he does indeed lose the upcoming election, are we all so sure that he'll cede power in a civilized matter?

After all, Netanyahu didn't allow President Reuven Rivlin to ask another party leader to form a coalition, as he's required to do according to the Basic Law: The Government.

Are we so sure Netanyahu won't fortify himself in the prime minister's residence, rally his base and set a political inferno?