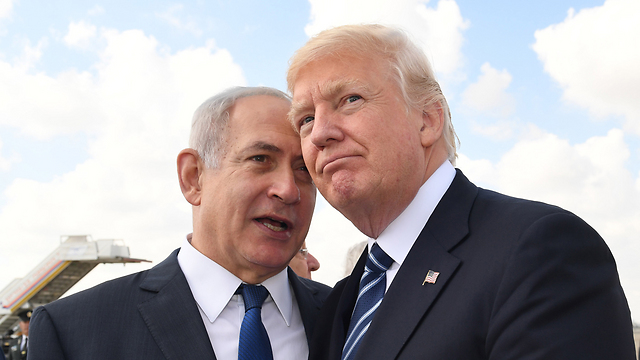 Netanyahu's dilemma over Trump's slap in the face

Analysis: The apparent American shift in position on Iran and its nuclear aspirations, in the shape of a meeting between the two presidents and sanctions relief for Tehran has left the prime minister in an uncomfortable situation and unable to criticize his 'very good friend' as he did with Obama

A meeting with Iranian President Hassan Rouhani and sanction relief for Iran weren’t just blows to Prime Minister Benjamin Netanyahu's plans, they were proof of the fickleness of U.S. President Donald Trump.

Now Netanyahu finds himself stuck between a rock and a hard place, in no position to criticize his "very good friend."

Boarding a flight Thursday morning for talks with Russian President Vladimir Putin in Sochi, Netanyahu is facing a genuine diplomatic nightmare right before Israel goes to the polls - tighter ties between Trump and Rouhani.

"I believe Trump will continue his policy regarding sanctions against Iran," Netanyahu told Israel Radio on Thursday morning. "As far as I know, he's not going to ease sanctions".

But he conceded: "You can't guide his every move, and you can't dictate who the U.S. president should and shouldn't meet. What I can tell you is that no one has influenced the opposition against Iran more than yours truly."

Ahead of his meeting with Putin, Netanyahu said that his focus remained on driving Iran out of Syria.

"The timing of this trip is imperative, we're working on several fronts to ensure Israel's safety against the threat Iran poses on the Syrian front," he told the radio.

"Our mutual goal, which right now is far from being realized, is the removal of all Iranian forces from Syria."

The prime minister appeared optimistic that the U.S. would not return to the agreement on Iran's nuclear program brokered by President Barack Obama in 2015, to which Netanyahu was and remains vehemently opposed.

"The United States came up with an outrageous nuclear agreement," he said. "They were the ones who gave Iran the freedom and means to build an empire around us. I changed that, I talked to President Trump, I talked before Congress. In the end, Trump did change the agreement, and imposed severe sanctions on Iran.

"If the U.S. and the president were to change their policy, I'm sure it would involve certain demands on Iran. I've communicated all the necessary information to President Trump and his advisors."

But according to Bloomberg, Trump sacked Bolton over his fierce opposition to sanction relief for Iran.

Three sources with knowledge of the situation said Trump had a discussion about Iran on Tuesday, meant to guarantee a meeting with Rouhani before the United Nations General Assembly in New York later this month.

According to reports, U.S. Treasury Secretary Steven Mnuchin supported the idea, and thought that sanctions relief would help to kick-start the negotiations with Tehran.

Bolton vehemently disagreed and argued with the president on the matter. A few hours later, Trump reportedly decided to sack Bolton.

The sources added that the White House has begun preparations for a possible meeting between Trump and Rouhani on September 23.

One of the possibilities being considered is a meeting that will also include French President Emmanuel Macron.

For Netanyahu, such a meeting between Trump and Rouhani so close to Israel's elections would be a serious blow to the isolation strategy he has led against Iran.

If the meeting were to happen, even more so when combined with the sanction relief, it would be a painful slap in the face for Netanyahu that would also serve as a reminder of how fickle Trump truly is.

Israeli officials have said for the last few days insisted that they in no way object to a meeting between Trump and Rouhani.

"We believe the best way to get Iran down from the ladder they're stuck on is to reach a newer, better agreement," they said.

"Trump made it known from the very first day after he departed from the agreement that he wanted to reach a better one, and to do that a meeting with the Iranians is required."

He added: "Initially it was the Iranians who opposed the meeting and demanded the sanctions be abolished as a precondition for a meeting with Trump."

And ultimately, Trump's expectation that he could meet with Rouhani without sanction relief was shattered.

If Bloomberg is right, Israel is in real trouble and Netanyahu trapped.

He can’t attack his old pal Trump, currently being shown shaking Netanyahu's hand on giant billboards all over the country. And he absolutely cannot go to Congress and attack the president as he did to Obama on the eve of the 2015 elections.

So, what did he do? He called for a "dramatic" press conference, where he again tried to blacken Iran's image, presenting it as a country whose goal was to deceive the international community, breach the nuclear agreement, and, worst of all, violate the Non-Proliferation of Nuclear Weapons Treaty (NPT) by seemingly hiding nuclear materials from a site Netanyahu revealed near the city of Abadan.

A source in Jerusalem believes that Netanyahu's reveal was a form of "counter-measure" meant to harden Trump's attitude towards Iran.

But according to Bloomberg, Netanyahu's revelation failed to impress Trump, who is still galloping to meet Rouhani complete with payment in the form of sanction relief in hand.

A source close to Netanyahu rejected the claim that if the U.S. eases sanctions before a Trump and Rouhani meeting, it would mean the colossal failure of Netanyahu's policy.

"Each state has its own interests," the source said.

"The fact that the U.S. has withdrawn from the agreement and imposed sanctions is a huge success," he said. "No one is naïve enough to think that it would last forever.

"The possibility of the current policy being eroded does not spell failure, and certainly not a colossal one, but rather a complexity that must be dealt with. It is unrealistic to have an attitude of everything being either black or white."

At the same time, there were those in Jerusalem who recalled the flattery showed on Trump by ministers after he decided to move the U.S. Embassy from Tel Aviv to Jerusalem.

Culture and Sports Minister Miri Regev said Trump's name would forever be engraved on the stones of the Western Wall, and then-justice minister Ayelet Shaked even compared him to Cyrus.

One must wonder if they will continue to express such praise even after his summit with Rouhani.