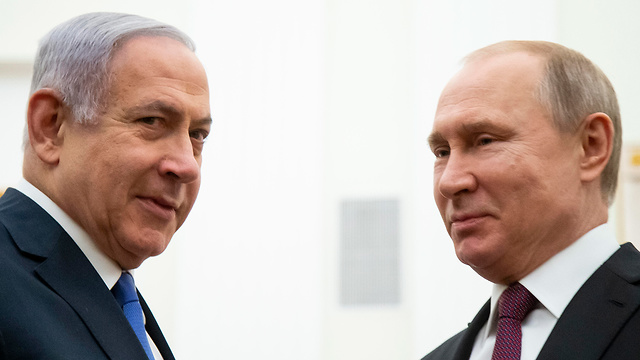 The Russian president refers to the upcoming elections, emphasizing importance to maintain relations between the countries; Netanyahu focuses on rising Iranian aggression

Russian President Vladimir Putin told Prime Minister Benjamin Netanyahu Thursday that he hopes whoever is elected in the upcoming elections will maintain the good relations between the two countries. "I remember the September 17th elections and hope who ever gets in the Knesset will preserve the friendship between our countries and strengthens our relations in the future," said Putin.

Putin also mentioned Russia's commitment to the large Russian-speaking community in Israel, saying "over 1.5 million immigrants from the Soviet Union live in Israel. We always considered them our people, compatriots".

The Russian president had also asked Netanyahu to tell President Reuven Rivlin that he would be happy to accept Rivlin's invitation to visit Israel to mark the 75th anniversary of the liberation of Auschwitz and said that if possible, he would like to inaugurate a memorial for the civilians of Leningrad who fought during the Nazi siege while on that visit.

Netanyahu also commented on the good relations between the two countries, while mentioning Israel's Russian-speaking population.

"The relations between our countries were never stronger. On one hand, there are over a million Russian speakers in Israel that make a living bridge between the countries.

"Tightening our relations is also the result of an informed mutual policy and of our personal relationship.

"This relationship prevented unnecessary and dangerous frictions between our armies, this is a fundamental component in the stability of the region. I appreciate your statement, saying that Israeli security is important to you and this is reflected in our meetings."

The Israeli incumbent also spoke about Iran's surging aggression towards Israel, using proxy-militants on Syrian soil to carry out attacks against Israel.

"The military coordination is always important, but it is especially important now, because over the past month we have seen a sharp increase in Iran's attempts to use the territory of Syria to attack us. This is an intolerable threat to us, so we must make sure there are no frictions between us."