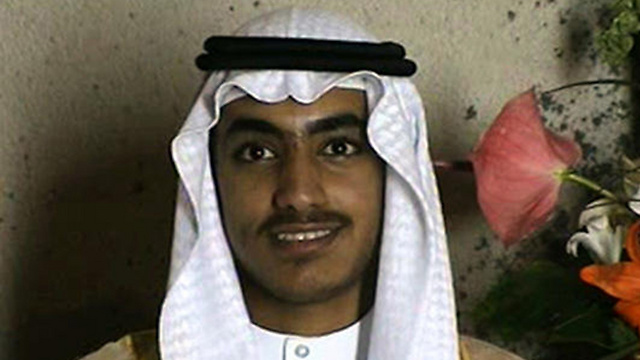 President Trump issues statement, saying Hamza bin Laden, son of the late al-Qaida terror group leader, was killed in a U.S. counterterrorism activity, without providing any further details; the 30-year-old had been viewed as an eventual heir to the leadership of al-Qaida

The White House announced Saturday that Hamza bin Laden, the son of the late al-Qaida leader who had become an increasingly prominent figure in the terrorist organization, was killed in a U.S. counterterrorism operation in the Afghanistan-Pakistan region.

A statement issued in President Donald Trump's name gave no further details, such as when Hamza bin Laden was killed or how the United States had confirmed his death. Administration officials would provide no more information beyond the three-sentence statement from the White House.

Hamza bin Laden (Photo: AP)
That statement said Hamza bin Laden's death "not only deprives al-Qaida of important leadership skills and the symbolic connection to his father, but undermines important operational activities of the group." It said Osama bin Laden's son "was responsible for planning and dealing with various terrorist groups." Several U.S. officials had suspected this summer that Hamza bin Laden was dead, based on intelligence reports and the fact that he had not been heard from in some time. The officials spoke on condition of anonymity to discuss intelligence matters. Defense Secretary Mark Esper told Fox News Channel in a late August interview that it was "my understanding" that Hamza bin Laden was dead. The younger bin Laden had been viewed as an eventual heir to the leadership of al-Qaida, and the group's leader, Ayman al-Zawahri, had praised him in a 2015 video that appeared on jihadi websites, calling him a "lion from the den of al-Qaida." The U.S. government in February said it was offering $1 million for help tracking down Hamza bin Laden as part of the State Department's Rewards for Justice program. The department's notice said he was married to a daughter of Abdullah Ahmed Abdullah, an al-Qaida leader and Egyptian charged for his role in the 1998 bombings of U.S. embassies in East Africa. They were said to have two children, Osama and Khairiah, named after his parents.

The U.S. government in February said it was offering $1 million for help tracking down Hamza bin Laden
He was named a "specially designated global terrorist" in January 2017, and he had released audio and video messages calling for attacks against the U.S. and its allies. To mark one 9/11 anniversary, al-Qaida superimposed a childhood photo of him over a photo of the World Trade Center. Video released by the CIA in 2017 that was seized during the 2011 U.S. raid that killed Osama bin Laden showed Hamza bin Laden with a trimmed mustache but no beard at his wedding. Previous images have only shown him as a child.

Hamza bin Laden as a child
Hamza bin Laden is believed to have been born in 1989, the year of the Soviet withdrawal from Afghanistan, where his father became known among the mujahedeen fighters. His father returned to Saudi Arabia and later fled to Sudan after criticizing the kingdom for allowing U.S. troops to deploy in the country during the 1991 Gulf War. He later fled Sudan for Afghanistan in 1996, where he declared war against the U.S. As al-Qaida's leader, Osama bin Laden oversaw attacks that included the 1998 bombings of the U.S. embassies in Kenya and Tanzania, as well as the bombing of the USS Cole off Yemen. He and others plotted and executed the 2001 attacks against the United States that led to the U.S. invasion of Afghanistan. U.S. Navy SEALs killed the elder bin Laden in a raid on a house in Abbottabad, Pakistan, in 2011. This past March, Saudi Arabia announced that it had revoked the citizenship of Hamza bin Laden. The kingdom stripped Osama bin Laden's citizenship in 1994 while he was living in exile in Sudan when Hamza bin Laden was just a child. It was unclear where Hamza bin Laden was at the time of the Saudi action.

Hamza bin Laden (Photo: EPA)
Hamza bin Laden began appearing in militant videos and recordings in 2015 as an al-Qaida spokesman. "If you think that your sinful crime that you committed in Abbottabad has passed without punishment, then you thought wrong," he said in his first audio recording. After the September 11 attacks, a U.S.-led invasion of Afghanistan sought to topple the Taliban, an ally of al-Qaida, and seize the elder bin Laden. He escaped and split from his family as he crossed into Pakistan. Hamza was 12 when he saw his father for the last time - receiving a parting gift of prayer beads.

אוסמה בן לאדן (Photo: Getty Images)
"It was as if we pulled out our livers and left them there," he wrote of the separation. Hamza and his mother followed other al-Qaida members into Pakistan and then Iran, where other al-Qaida leaders hid them, according to experts and analysis of documents seized after U.S. raid that killed Osama bin Laden. Iran later put the al-Qaida members on its soil into custody. During this time, Hamza married. In March 2010, Hamza and others left Iranian custody. He went to Pakistan's Waziristan province, where he asked for weapons training, according to a letter to the elder bin Laden. His mother left for Abbottabad, joining her husband in his hideout. On May 2, 2011, the Navy SEAL team raided Abbottabad, killing Osama bin Laden and his son Khalid, as well as others. Saber and other wives living in the house were imprisoned. Hamza again disappeared. In August 2015, a video emerged on jihadi websites of al-Zawahri introducing "a lion from the den of al-Qaida" - Hamza bin Laden. Since then, Hamza had been featured in al-Qaida messages, delivering speeches on everything from the war in Syria to Donald Trump's visit to Saudi Arabia on his first foreign trip as president. But he hadn't been heard from since a message in March 2018, in which he threatened the rulers of Saudi Arabia.