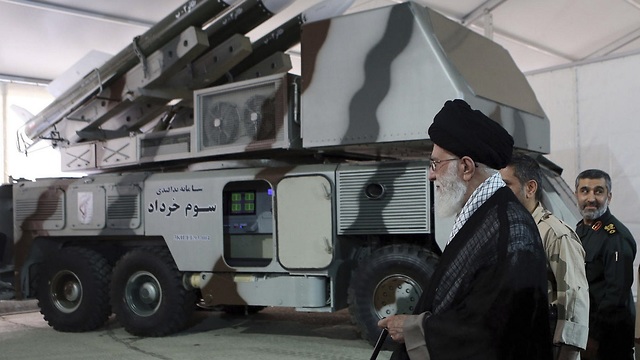 Iran: U.S. bases, aircraft carriers within range of our missiles

An Iranian Revolutionary Guards commander said on Sunday that U.S. bases and aircraft carriers in the region were within range of Iranian missiles after the U.S. accused Iran of leading attacks on Saudi oil plants, raising tensions in the Middle East. Yemen's Iran-aligned Houthi group said it attacked two Saudi Aramco oil plants on Saturday at the heart of Saudi Arabia's oil industry, knocking out more than half the Kingdom's output.

Iranian Supreme leader Ayatollah Ali Khamenei inspecting the country's anti-aircraft missiles (Photo: AP)
U.S. Secretary of State Mike Pompeo accused Iran of being behind the attacks, ruling out Yemeni involvement and denouncing Tehran for engaging in false diplomacy. Pompeo, said on Twitter on Saturday that there was no evidence the attacks came from Yemen.

"Everybody should know that all American bases and their aircraft carriers in a distance of up to 2,000 kilometers around Iran are within the range of our missiles," the head of Iran's Revolutionary Guard Corps Aerospace Force Amirali Hajizadeh said on Sunday.

The semi-official Tasnim news agency also quoted him saying that "Iran has always been ready for a 'full-fledged' war," without mentioning Saturday's attacks in Saudi Arabia.

One of the plants attacked is the world's biggest petroleum processing facility.

U.S. President Donald Trump told Saudi de facto ruler Crown Prince Mohammed bin Salman that Washington was ready to work with the kingdom to guarantee its security, according to the White House.

Pompeo, however, said on Twitter that there was no evidence the attacks came from Yemen.

"Amid all the calls for de-escalation, Iran has now launched an unprecedented attack on the world's energy supply," he added. The State Department declined to provide any evidence to bolster Pompeo's claim.

"We call on all nations to publicly and unequivocally condemn Iran's attacks," Pompeo said, warning that the Trump administration would work with its allies to make sure Iran was "held accountable for its aggression."

Tehran is behind nearly 100 attacks on Saudi Arabia while Rouhani and Zarif pretend to engage in diplomacy. Amid all the calls for de-escalation, Iran has now launched an unprecedented attack on the world’s energy supply. There is no evidence the attacks came from Yemen.

The tweets signaled a more hawkish stance in Washington towards Tehran, following signs of a possible thaw in relations between the two nations after months of escalation.

Trump last year withdrew the United States from a 2015 pact that aimed to keep a lid on Tehran's nuclear ambitions and he has imposed a series of sanctions that have crippled Iran's economy.

But in recent weeks, Trump has said he would be open to meeting with Rouhani, perhaps on the sidelines of the United National General Assembly in New York later this month. Pompeo has said such talks could take place without any preconditions.

Rouhani, for his part, has said that Tehran, which denies seeking nuclear weapons, would not talk to the United States until Washington lifts the sanctions.