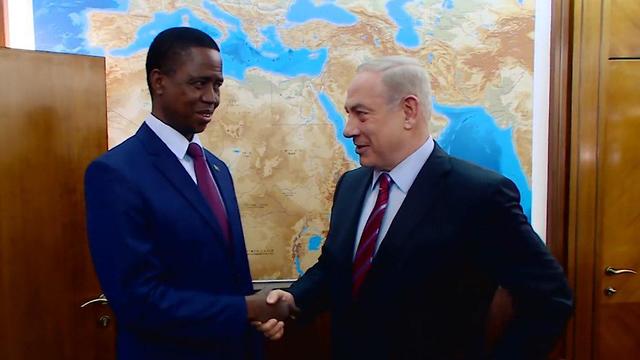 Former minister and presidential hopeful Chishimba Kambwili says Edgar Lungu used his presidential jet to courier narcotics and undeclared monies from Israel during historic 2017 visit, admits he has no facts to back up claims

"It has been brought to my attention that allegations have been made regarding smuggling of money from Israel on board of the official aircraft of the President of Zambia," Kedar said in a statement. "I vigorously and officially deny such malicious and false allegations."

These allegations were made by former Zambian minister and presidential hopeful Chishimba Kambwili last week.

Kedar noted the good relationship between Israel and Zambia, and reiterated that all bilateral business is carried out in in coordination with the laws of each nation.

"The relations between Israel and Zambia are positive and multifaceted and are all conducted according to the laws and regulations of both countries," said Kedar.

"Various Israel companies were active in Zambia in fields such as agriculture, water, information technology, health, communications, defense, all of which were subject to Israeli laws prohibiting corruption (as per Israel's membership of the Organisation for Economic Cooperation and Development) and stringent procedures regarding international financial transactions," Kedar said.

National Democratic Congress leader Kambwili conceded that he had “no facts” to back up his allegations.

"I am trying to protect your (Lungu's) integrity, protect Zambia’s integrity and protect the ordinary people of Zambia," he said.

"Because if it is proved that indeed there are some dealings in drugs going on, then we are in trouble as a nation and the people who are going to suffer are not (Valden) Findlay (businessman accused of drug trafficking), it’s not President Edgar Lungu, it’s actually the ordinary poor Zambian people."

Findlay denied the allegations and is suing Kambwili for his claims, the Zambia media reported last week.