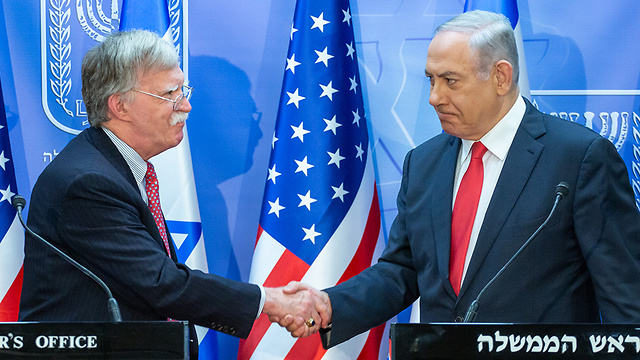 Iran will still exist the day after Israel's elections

Opinion: The country's leadership, whoever it ends up being, must ensure that it is not sidelined by the United States whether it enters into negotiations with Tehran or is dealing with a revived and accelerated Iranian nuclear program

John Bolton is a true friend of Israel. The former ambassador, who quit his job as national security adviser a few days ago, is leaving the administration in the wake of what appears to be a worrying shift in President Donald Trump's policy on Iran.

Many in the political establishment have already defined the American about-face as "a disaster for Israel," but ultimately the national security adviser is just an adviser, and the decisions are taken in the Oval Office by the president of the United States.

Now that Israel's ally Bolton has gone, there seems to be consensus – amid the assorted background noise of the election campaign - that the most pressing issue is the newly developed gap between Trump and Netanyahu on the Iranian nuclear threat.

In recent months, it's been pretty clear that the positions of Bolton and Trump have diverged. Trump sending of his national security adviser to Mongolia while he met with North Korean leader Kim Jong Un to discuss nuclear disarmament was one example of this.

Another example is Trump changing his mind after deciding – with Bolton's recommendation - to attack targets in Iran after a U.S. drone was downed in the Strait of Hormuz in June.

An adviser's impact can be measured by their ability to whisper in a decision-maker's ear, and by the latter's willingness to accept their recommendations.

Once Trump's position changed and attentiveness dissipated, Bolton could not promote his own agenda against the regimes that in his view that threaten U.S. national security.

Bolton and Netanyahu share a similar worldview. Both supported the withdrawal of the United States from the 2015 nuclear agreement and the implementation of a policy of "maximum pressure" on Iran, both economically and diplomatically.

Both hoped for the collapse of the regime in Tehran and wanted to attack Iran should the regime have resuscitated its nuclear program.

Netanyahu's hopes of influencing the president to adopt his and Bolton's approach have been dashed.

To Trump, Iran comes a mere fourth in his list of strategic concerns, after China, Russia and North Korea.

Israel's next prime minister, whether it be Netanyahu again or someone else, must instruct the diplomatic-defense establishment to prepare for two highly likely scenarios: the return of the United States and Iran to the negotiating table to reach an improved agreement, or Iran's departure from the nuclear agreement leading to the acceleration and expansion of its nuclear program.

In the negotiations scenario, Israel must not be left out again – it must not boycott the talks and not be shunted to one side.

In a scenario in which Iran does not come to the negotiating table at all, but revives its nuclear program, Washington must agree in advance on its red lines and which levers - diplomatic, economic and military – it will use, and by whom, if Tehran insists on advancing its nuclear program.

Israel must understand if the United States is leaving it alone in its campaign to halt the Iran nuclear deal.

Bolton's departure is a negative development for Israel, and signals a far more alarming trend in U.S. policy towards Iran.

It is imperative to ensure that there is strategic understanding and coordination of expectations between Israel and the U.S. in either of these scenarios.

The election campaign ends Tuesday, and the empty rhetoric such as cameras in polling stations and West Bank annexations will be forgotten. It is incumbent on the country's leaders to deal with the major strategic problems it is faces, ones which directly affect Israel's national security, for they will not evaporate on Wednesday.