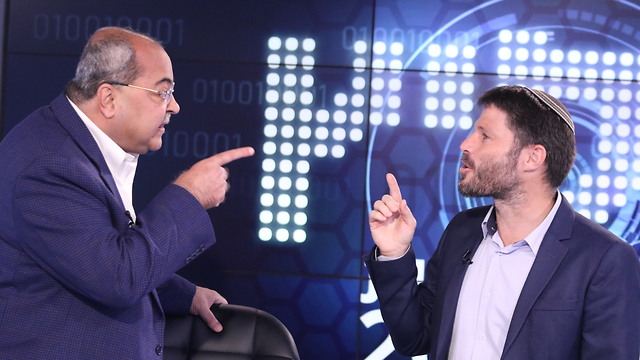 'You're racist garbage,' says Arab MK to his far-right counterpart

The leader of the Joint List of Arab parties, Ahmad Tibi, lashed out at a senior member of the far-right Yamina party Bezalel Smotrich on Monday, calling him a “racist garbage” live on air.

In a last-ditch media blitz, with 24 hours to go before Tuesday’s elections, the two MKs, known for their sometimes controversial rhetoric, squared up in a Ynet studio just as Smotrich was finishing up his interview and Tibi had just stepped into the room to begin his.

“You’re not gonna shake my hand?” asked Smotrich as Tibi was making his way across the room, deliberately trying to avoid the transportation minister.

Smotrich repeated the question several times and then when on to accuse the Arab MK of being racist and supporting terror. “Take down the picture of Yasser Arafat from your office,” said Smotrich to Tibi. “Stop supporting those who murder Jews.”

Tibi - who remained quiet until that point - then burst out, calling Smotrich a “despicable racist.”

“You and your wife are racist garbage,” said Tibi, referring to an incident when Smotrich’s wife Revital said it was “unpleasant” for her to be in the same hospital room with Arab women after giving birth three years ago.

“I expelled an Arab obstetrician from the delivery room,” said Revital back in 2016. “Anyone who is not Jewish is a problem for me, the moment the baby is born, he is sacred, pure, Jewish … I would love for Jewish hands to be the first hands to touch my baby.”

Tibi then told Smotrich to “be ashamed of yourself” for the way his family talked about Arab women. “This is why I’m not shaking your hand.”

Smotrich with his wife Revital and their children

Once the exchange was over, Tibi began the interview by suggesting that racism has become “mainstream” in Israeli society.

“Yitzhak Shamir used to leave the Knesset plenum when Meir Kahane would go up to speak. In the previous elections, Netanyahu crawled to Itamar Ben-Gvir (who was in Kahane’s youth movement) to get him into the Knesset.”

When Tibi was asked about the controversial remarks of his former Joint List partner Hanin Zoabi, the Arab MK claimed that “she has never said anything racist.”