Campaign posters for the Blue and White and Likud parties
Photo: EPA 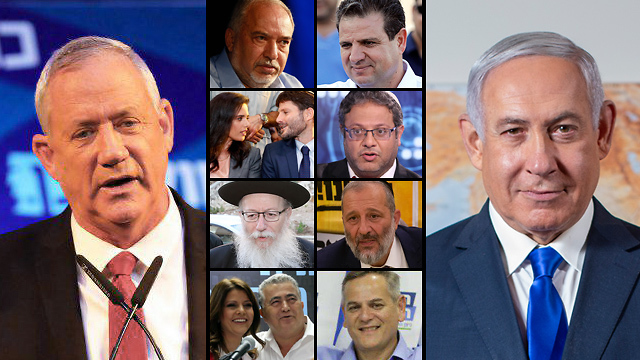 6,394,030 eligible Israeli voters will cast their ballots at 10,885 polling stations across the country, choosing between 29 parties and factions competing for seats in next 120-member parliament

The polls opened across Israel at 7am on Tuesday morning as 6,394,030 eligible Israeli voters began casting their ballots for the second time in six months on the make up of the next Knesset - and the prime minister who will lead it.

The 10,885 polling stations across the country were to remain open from 7am until 10pm, allowing voters to decide between the 29 parties and factions competing for seats in the next 120-member parliament.

Exceptions are made to these hours at hospitals, jails and communities with fewer than 350 residents, where the polls were to be open from 8am until 8pm.

Voting for IDF soldiers began Saturday evening at bases around the country, and diplomats abroad have also cast their ballots early.

While in some countries voting is compulsory, in Israel it is optional. Election Day, however, is considered a national holiday in order to facilitate the electoral process.

Throughout the day, the Central Election Commission's control and command center, which has been set up at the Knesset compound, will receive information from polling stations about public inquiries, voting percentages and any reports of irregularities.

Prime Minister Benjamin Netanyahu's Likud party has claimed throughout the election season that there was vote tampering in the April polls.

The party tried to have cameras placed in polling stations, a call rejected by Central Election Commission Chairman Justice Hanan Melcer. Last minute efforts by Likud to legislate for cameras in the polling stations also failed.

Instead, Melcer established a new mechanism to uphold the purity of the elections, under which some 3,000 inspectors carrying bodycams will visit all polling stations throughout the country.

The cameras will only be switched on during voting in exceptional cases and after receiving approval from the Central Election Commission, which has set up a hotline for this purpose.


Votes are cast in Israel by paper ballot only, so as to minimize the potential for cyber attacks on the electoral process.

Israeli voters must produce an ID card, a valid driving licence or passport in order tro cast their ballot. Voters present their identification to the people manning the relevant polling station, and are handed an envelope in which to place their paper ballot. They then go behind a screen and select a slip of paper representing the party for which they wish to vote.

The slip of paper is placed in the envelope, which is then sealed and dropped into the ballot box that is supervised by election officials at each station. Voters must take care to ensure that they do not place two slips and invalidate their vote.

Once the polls are closed - and the TV channels have released their exit polls - the committee members at the thousands of regular polling stations will begin counting the votes, a process that usually lasts two to three hours.

Throughout the night, results from the polling stations where the count has been completed will be updated on the Central Election Commission website.

The results from regular polling stations are expected by Wednesday afternoon – accounting for about 95% of the vote.

By Thursday evening, the final results are expected to be released, including for polling stations known collectively in Hebrew as "double envelopes," where soldiers, hospital patients, inmates, women in shelters, election officials and diplomats in foreign countries cast their ballots.