Israelis line up to vote in elections
Photo: Dana Kopel 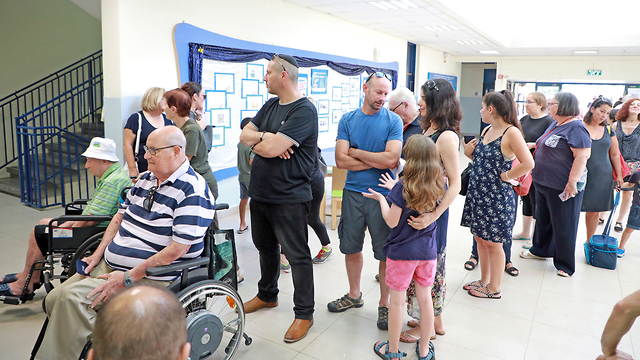 Central Elections Committee says the turnout by 8pm stood at 63.7%, higher than the amount of people who voted by the same time in the April 9 ballot when the turnout stood at 61.3%

The turnout in Israel’s election on Tuesday was slightly higher by evening hours than by the same time during the previous vote five months ago.

Israelis line up to vote in elections (Photo: Dana Kopel)

Election Day is a national holiday, a measure aimed at encouraging participation, and voter turnout has emerged as a key element of this election.

"It's exhausting and tiresome, but there's no way I'm not voting," said Talia who was in line at a polling station in central city of Kfar Saba. “Every vote counts,” said one child who came with his parents to the polling station.

"We all live in a state of uncertainty and hope for the best,” said Isaac Balankin, also from Kfar Saba. “The big concern is that there might be part three," he added, referring to the possibility of an unprecedented third election in a row.

In April's ballot, turnout was about 69%, slightly below the 72% figure in the previous election in 2015.

But turnout in the minority Arab sector was just below 50% and many Arab voters boycotted the election. The various Arab leaders have handed together on a joint list for this election, hoping to boost turnout.

As a result, some in the Arab community have called out for voters to show up at the polling stations in a bid to raise voter turnout in the Arab sector, after Prime Minister Benjamin Netanyahu claimed earlier on Tuesday the turnout in the community is higher than usual.

"This time everyone needs to vote and not be complacent," said Amin Haj Yhya, an Arab voter from Taibeh.

Mohamad Jabaly, also from Taibeh, said he encouraged people to go and vote as well. "I arrived at the polling station early in the morning and voted and continued to campaign in order to people who didn't want to vote to come vote and make a change" said Jabaly.

Balloting began at 7am with exit polls expected at the end of the voting day at 10pm. Anyone who arrives at a polling station before 10pm can still cast their ballot even if they are in line until after the deadline passes. Official results are projected to come in overnight.