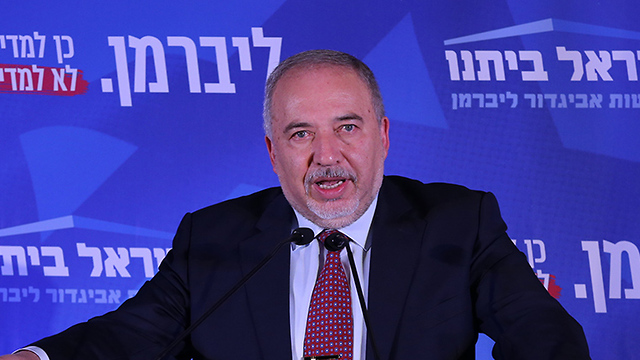 Liberman: Unity government along with Likud, Blue and White is 'only option'

Yisrael Beytenu leader Avigdor Lieberman, who has emerged as the kingmaker after exit polls from Tuesday's elections, said he wants to form a unity government with Benjamin Netanyahu's Likud and Benny Gantz's Blue and White party.

The surveys by Israel's three main television channels gave the right-wing Likud 31-33 of the Knesset's 120 seats compared with 32-34 for the centrist Blue and White, indicating there is no clear winner in Tuesday's election race.

“I hope both parties publicly announce their plans to form a broad liberal government and, of course, I would highly recommend it without even being asked,” Liberman said.

"There is only one option - a liberal national unity government made up of Likud, Blue and White and Yisrael Beytenu," he said

Meanwhile, a Likud MK closely allied to Netanyahu said the party is "not satisfied" with the results of the exit polls.

"I cannot say that we are satisfied with the exit poll results," said Miki Zohar told Ynet. "What we are seeing now is that there is now clear win for the left or the right."

Blue and White MK Hili Tropper, meanwhile, said the exit polls show Netanyahu has failed in the second national vote of the year.

"Netanyahu has failed for a second time," Tropper said. "He forced us into elections and he did not make the 61 (MKs he needs for a majority)."

Culture and Sport Minister Miri Regev of Likud said the people should wait for the final election results before rushing to conclusions, and that Netanyahu will not be stepping down from his position as prime minister.

"The prime minister will wait patiently like the rest of Israeli citizens," Regev said. "Netanyahu said he will form the best and most stable government, we will sit with whoever is willing to accept the Likud's basic guidelines."

Initial exit polls also indicate the Joint List, an alliance of Arab parties, won around a dozen Knesset seats, making it the third largest bloc in Israel's next parliament.

Ayman Odeh, the leader of the Joint List, told Israeli media that if the final results match the exit polls, Arab voters will have "prevented Netanyahu from forming a government," and the results would mark a "historic" moment for the minority.

"Netanyahu did everything he could to steal the elections, but the Israeli public is not Netanyahu. We need to start making bonds to form an alternative coalition that will replace Netanyahu's corrupt coalition."