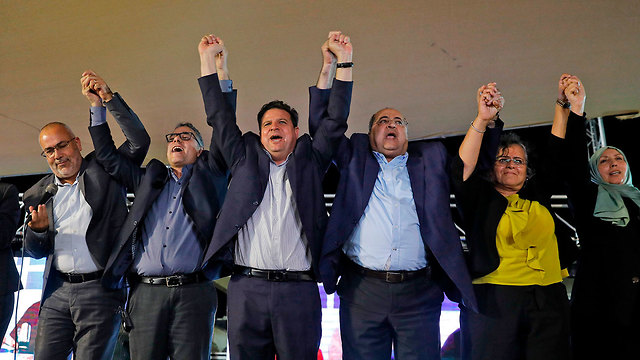 An updated exit poll by one of Israel's main television channels gave the Joint List of Arab parties an unprecedented 15 seats in Tuesday's national elections.

This could potentially even see the faction becoming the main opposition party should the Likud join with Blue and White to form a national unity government, as demanded by Yisael Beytenu leader Avigdor Liberman, whose party holds the balance of power in forming a coalition.

The Joint List of Arab parties celebrates its showing in the Tuesday elections (Photo: AFP)

If all three of the TV exit polls prove correct, the Joint List, headed by Ayman Odeh and Ahmad Tibi, would be the third-largest party in the 120-member Knesset.

Joint List no. 3 MK Ahmad Tibi said Tuesday night that the results coming in in real time reinforced the predictions of the exit polls that they would win 13-15 seats.

"Apparently the Arabs flocked to the polls," Tibi told Ynet, in a reference to a much-criticized remark by Netanyahu during a previous election.

Tibi was more circumspect about possible outreach from Blue and White in light of the results.

"I'm not saying if anyone will call or not," he said. "No doubt they will be in touch. Fifteen seats cannot be ignored."

According to the exit poll from Channel 13, Blue and White has also expanded its lead over the Likud, giving the former 32 seats and the latter 30.

According to all three exit polls, Netanyahu has failed to reach the 61 seats he needs to form a government.

While the exit polls show Gantz has an advantage over the Likud, he too is unable to form a government of center-left parties.

Liberman, whose party is predicetd to win six to eight seats, has said a government of national unity comprising Yisrael Beytenu, Likud and Blue and White is the "only option."

Gantz has said he will not join a government with Netanyahu due to the latter's various criminal investigations.