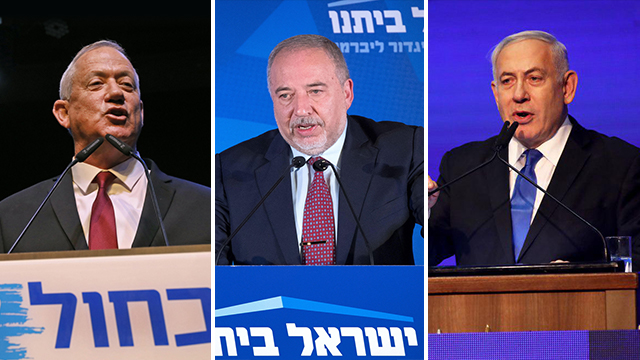 Netanyahu's era is over, Israel is on a new path

Opinion: The prime minister has lost his allies and his touch, and the future identity of the state now rests on kingmaker Avigdor Liberman, Benny Gantz's determination, and the Likud's willingness to boot its long-term leader from its midst

Benjamin Netanyahu is in a tight spot, and it will be a few more days until we can determine the exact make up of the next Knesset.

But until then, we can safely say that in the decade of Netanyahu's rule, his situation has never been worse than it was on Tuesday. And it's not because the magic suddenly dissipated.

Netanyahu dragged Israel to another round of elections (Photo: AFP, Tal Shahar, EPA)

Netanyahu failed in the April vote as well. He couldn't form a coalition then and so he dragged the people of Israel back into another round of elections.

Despite Israelis' long experience with sudden political upheaval, one can safely say that the latest elections were a heavy blow not just for Netanyahu, but for the whole of the Likud and the entire right-wing.

According to the results still being counted, it's hard to see how Netanyahu can escape a situation where Blue and White outstrips the Likud.

The right-wing is smaller than the central-left, and Netanyahu needs a miracle to be able to form a government. These days, Netanyahu is not a man of miracles, not anymore.

The choices Netanyahu has made lately, including in the week before the elections, are the choices of a frightened and weak man, who's willing to do anything - including going to war against the advice of the entire Israeli security forces - to keep his seat and not face the wrath of the justice system.

Netanyahu's latest actions are a those of a frightened man (Photo: AFP)

The election results are proof that the people are fed up with Netanyahu.

Benny Gantz may not be viewed as the ultimate leader, but he is viewed as a viable alternative to Netanyahu, and an alternative is what Israel wants.

That’s why Netanyahu cannot consolidate an obstructive bloc, failed to shove Lieberman under the election threshold, and miscalculated the might of Otzma Yehudit (Jewish Power).

All of these are grave failures for a man with the abilities Netanyahu once possessed.

If there had been someone in the April elections who could have stepped forward and usurped the leadership, like Ariel Sharon once did to the Likud, Israel wouldn’t have had to have a second round of elections.

The problem is that, even now, we're dependent on people who haven't shown a sliver of leadership skills, and it's hard to imagine any of them showing any today.

But now, we have someone who stepped up, and he was the one who brought the revolution we witnessed on Tuesday.

Avigdor Liberman could be the one to change the face of Israel (Photo: EPA)

Avigdor Liberman is not only the winner of these elections, he's also the one who gets to choose the identity of the next government.

It wouldn’t be an exaggeration to say that if the election's actual results are similar to the surveys, the chairman of Yisrael Beytenu could very well change the face of the country.

And now the Likud, whose members signed a declaration of eternal loyalty to Netanyahu, needs to act.

It's not easy turning your back on a leader, especially in a party like the Likud, but it's inevitable.

If the Likud doesn't pull itself together, we could find ourselves on a slippery slope to a third round of elections.

On Tuesday, we heard some voices in the party declaring Netanyahu as the Likud's sole leader.

Allow me to scoff, we'll all see how fast things are going to change over there.

So maybe the Likud is the one who's going to build the next government, it's hard to see how Benny Gantz can form a coalition without uniting with the Likud, but whatever it might be, it won’t be Netanyahu's Likud anymore.

Gantz has a massive mission to undertake, let's hope he can rise to the challenge.