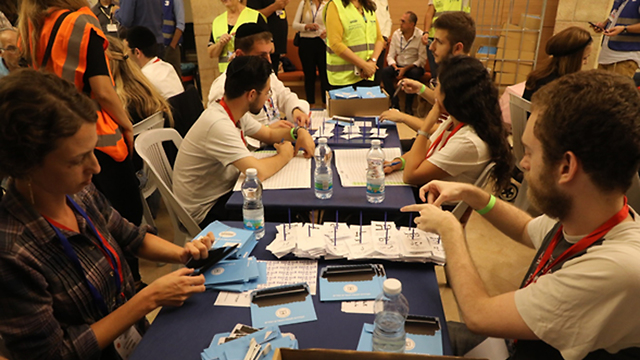 The Blue and White party has won 33 seats to the Likud's 31, according to an update from the Central Elections Committee on Thursday morning, with 96.5% of the vote in Tuesday's elections counted.

The count of these ballots began at 1am Thursday morning, with the latest data released some eight hours later. Some 280,000 of these ballots have been counted so far. The incomplete results show 1,035,635 people voted for Blue and White compared to 1,010,246 votes for Likud.

Unlike a standard vote, where the envelope containing a paper ballot is placed directly into the ballot box, these ballots are inserted into a second sealed envelope on which a voter's information is recorded to ensure that he or she has not voted twice.

Israel's Ambassador to Australia Mark Sofer casts his vote in Canberra ahead of Tuesday's elections
Unlike regular ballot envelopes, the double envelopes are not counted at the polling station where voting took place but are transferred to the Central Election Committee's headquarters at the Knesset.

Only after verifying that a voter has not cat two ballots is the ballot slip removed from the second named envelope and the original unmarked envelope is mixed in with other ballots to ensure anonymity of the voters.

In the April elections, a total of 240,783 people voted using double envelopes. This amounted to about 5.5% of the total votes cast – which translates to between 6 and 7 seats in the 120-member Knesset.

The double-envelope count in April, saw the Likud receive another seat and United Torah Judaism lose a seat.

IDF soldiers voting in Tuesday's elections (Photo: IDF Spokesperson's Unit)
The election count will likely continue through Thursday evening. Only after the double envelopes are counted will they be added to the other votes cast, and the process of calculating the final number of seats per party mandates will begin.

Meanwhile, Prime Minister Benjamin Netanyahu on Thursday called on Blue and White Chairman Benny Gantz to meet with him to form a broad unity government.

Neither the centrist Blue and White or the right-wing Likud appears to be able to muster the 61 Mks needed to form an outright majority.

Netanyahu said Wednesday that he had a bloc of 55 MKs from the right, far-right and religious Jewish parties - six short of what is needed.