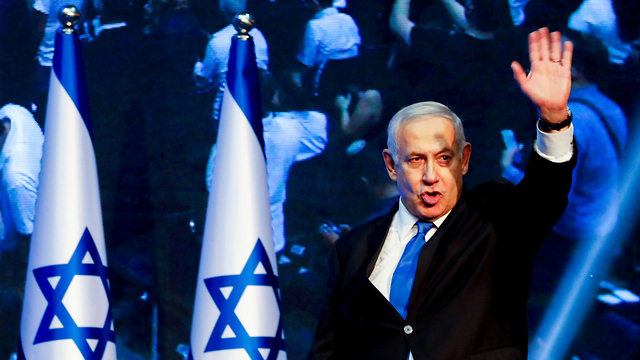 Analysis: The prime minister has a short breathing space as he tries to form a government, but if he fails for the second time in six months, he will find the voices in his own party calling for his ouster are growing louder

While Prime Minister Benjamin Netanyahu is busy battling Benny Gantz for President Reuven Rivlin's invitation to form the next government, he is also being forced to keep an eye on his party.

He needs to ensure that no one is making contact behind his back with the Blue and White leader or Yisrael Beytenu's Avigdor Liberman in a bid to form a national unity government without him.

At this stage, he can probably relax: Likud officials say that until Netanyahu fails to form a government, nobody in the party will come out against him.

However, the officials say, if he does fail to form a government for the second time - his whole situation could change in an instant.

"The first time voices come out against him will be when he fails to put together a government," senior Likud officials said.

"At that point Likud voters and functionaries will begin to understand it will be possible to put together a right-wing government - led by the Likud - without Netanyahu."

This is the scenario that Netanyahu fears and one that would see him find himself facing calls within the Likud for his replacement.

As such, there are those in Netanyahu's inner circle who are recommending that he hold speedy primaries for the party leadership - should he sense a rebellion against him is brewing.

Such a move would aim to expose any potential political landmines befire they explode his face.

"This is something that Netanyahu will seriously consider," Likud officials said.

"This would also pose a very great threat if Netanyahu does fail twice to form a government."

On Wednesday, Netanyahu convened a meeting of the right-wing factions in the Prime Minister's Office in Jerusalem, securing their written pledge to stand behind him as a united right-wing bloc that will work together to form the next government.

But even with the support of the right-wing parties, Netanyahu is only able to form a bloc of the 55 MKs - and not the 61 he needs for a majority government. However, Benny Gantz is facing the same problem on the center-left.

Benajmin Netanyahu speaking to reporters the day after the elections (Photo: Reuters)

With almost all of the votes counted, Blue and White is leading Likud by 2 seats - 33 to 31.

Meanwhile, the election results led Netanyahu – who bragged throughout the campaign of his impressive standing on the international stage - to cancel his speech at the UN General Assembly next week.

Instead, it will be Foreign Minister Israel Katz, a recent appointee after Netanyahu himself held the portfoilio for years, who will be hobnobbing with world leaders and delivering an address from that famous podium in New York.