A man in the Iraqi city of Basra protests against corruption, January 2019
Photo: Getty Images 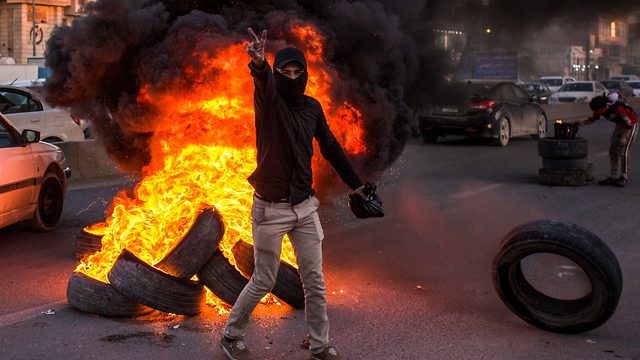 Corruption warriors: Investigative journalists on the rise in Arab world

In a region where abuses of power are rife, investigative journalism is viewed as an important tool to combat corruption and to motivate governments and businesses to act in the interest of the public, and the number of exposes is increasing steadily

There has been an increase in investigative journalism covering issues of corruption in Arab countries, according the Qatar University’s Abdulrahman Al-Shami. Al-Shami published a study on the issue as part of a recently released book, Off and Online Journalism and Corruption − International Comparative Analysis.

A man in the southern Iraqi city of Basra blocks a road during a demonstration against corruption and lack of services, January 11, 2019 (Photo: Getty Images)
Corruption is rampant in the region. According to Transparency International’s Corruption Perceptions Index 2018, which, based on the opinions of specialists and business sector participants, rates countries from 0 to 100 (with 100 being the highest), Qatar, Oman and the United Arab Emirates were the only Arab countries to receive scores above 50. Investigative journalism is viewed as an important tool to combat corruption and to motivate governments and businesses to act in the interest of the public.

“Corruption is anything that means abusing power, or making wrong decisions, or turning a blind eye to laws at the expense of public rights and money,” says Rana Sabbagh, executive director of Arab Reporters for Investigative Journalism.

“Corruption is not just stealing money; corruption is basically not being able to have properly functioning toilets in schools.”

According to Shami’s study, Egypt leads the Arab world in investigative reporting, with 45 pieces published in 2016-2018, or 31 percent of the coverage in the region. Next comes Yemen with 26 reports and Tunisia with 12, about 18% and 8%, respectively, over the same period. The fewest instances of investigative journalism in a specific part of the Arab world came in the Palestinian territories, with just six pieces published. The report divided corruption into six categories. Al-Shami found that three received the most coverage: “administrative and financial,” “legislative and judiciary” and “abuse of power and political influence.”

A rare protest against Hamas rule in Gaza (Photos: Archive )

“Administrative and financial” issues, which were the subject of approximately 30% of the reports, include money laundering, which is a particular problem in the UAE, and not giving people the rights they are due, such as keeping public transportation inaccessible to people with disabilities.

Among the reports was a landmark achievement known as the “Panama Papers,” a series of articles published in 2017 involving improper use of authority across several countries in the region.

It revealed, among other things, that former Iraqi prime minister Ayad Allawi maintained three secret companies that were used to avoid paying taxes, and how the upper echelons of Algerian society misused oil money.

“There are tangible increases in investigative journalism (in the Arab world) from a quantitative and qualitative perspective,” says al-Shami.

The increase in investigative journalism in a part of the world that is particularly unwelcoming to members of the media might come as a surprise to some.

"The Reporters Without Borders (RSF) 2019 World Press Freedom Index states that “the Middle East and North Africa region continues to be the most difficult and dangerous for journalists.”

Sabbagh from the Arab Reporters for Investigative Journalism says: “I personally cannot go to Egypt anymore; I’m on their watchlist.” After the Arab Spring, a series of rebellions across the Middle East and North Africa that began in 2011, there was greater freedom of the press, but that was scaled back, according to Sabbagh, after Egypt’s questionable 2014 election, when President Abdel Fattah el-Sisi started clamping down on journalists, and other Arab states followed suit.

“(The climate in the Arab world) is becoming very hostile. The security forces everywhere are using the latest up-to-date surveillance.… They hack Facebook and our phones; occasionally they send messages,” Sabbagh said.

“I got one recently saying I had a case in court and if I don’t go there, I will be fined…. I found out that it was just a fake message so I had to throw away my iPhone.”

Sabbagh said many of the investigative journalists she worked with published their pieces under pseudonyms in an effort to stay safe. Qatar University’s al-Shami argued that the increase in investigative journalism today was the fruit of extensive training by organizations such as Sabbagh’s, which began operation in 2005 and has produced almost 600 such reports in 14 years. “(Investigative journalism is) not just reporting; it’s building sources, it’s verification of data…. It takes at least 10 years (to learn),” Sabbagh said. “It’s like training someone to become a good boxer; it doesn’t happen overnight.”

Protests against political corruption in Tehran (Photo: AFP)
Al-Shami said that to bolster investigative journalism, in addition to training, journalists needed to learn about their legal rights. “When it comes to some countries in the Arab world, reporters need to protect themselves from not winding up in a court for publishing authentic information,” he said. Al-Shami added that the international community needed to step up to help increase the number of investigative journalists. “It is hard to imagine that investigative reports could be prepared without financial support from foreign donors,” he said. Sabbagh is optimistic about the future of reporting in the region.

“Investigative journalism is increasing around the world…. and the Arab world cannot be left behind,” she said.