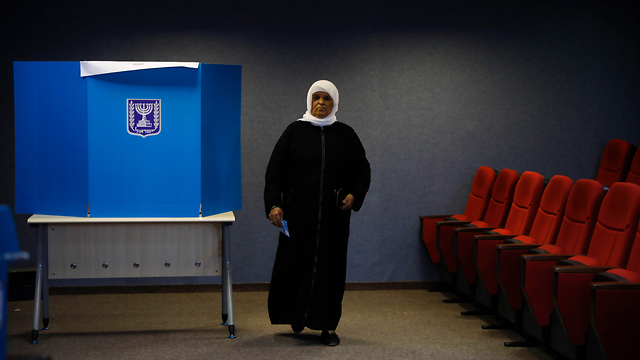 The September 2019 elections saw a spike in voter turnout of Arabs voters. The Arab parties' decision to run for Knesset as a joint list, along with the right-wing campaign against the members of the community are the main factors for this upswing.

Blue and White Leader Benny Gantz has already solidified his rock star status among Israel's Druze population, especially in light of his strong words against the Nation-State Law, which has been criticized for treating non-Jewish israelis as second class citizens.

A woman votes in the September 17, 2019 elections at a polling station in Kafr Manda (Photo: AP)

Anwar Saab, one of the heads of the protest against the Nation-State Law, says Gantz is so popular among the Druze community for several reasons.

"He also spoke out a lot against the Nation-State Law, and the Druze remember his time in the army (serving as Chief of the General Staff)."

"Voter turnout in the Arab sector stood at 59.8% and at 52% in the Druze sector, with every second Druze voter voting for Blue and White," says Makladeh.

"The main reason for the high voter turnout in the Druze sector is the delegitimization that is done to it by the law that raises the penalty for building offenses and the Nation-State Law.

"In the past, some 40% of the Druze community voted right and 60% voted center-left, but these elections, the ratio shifted to 10%-90% for the center-left."

Head of the Kafr Yasif municipality, Shadi Shweiry, claims the spike in voter turnout in the Arab sector could be explained by the Arab parties' renewed merger into one list.

"The election results are very good for us in terms of promoting the treatment of problems in the Arab sector, such as illegal construction, town planning, violence and other issues," said Shweiry.

Many also agree that Prime Minister Benjamin Netanyahu's inciteful election campaign was a crucial factor in motivating the Arab voter to go to the polling stations, Yousef Makladeh among them.

"We saw a very aggressive campaign, filled with accusations on behalf of the Likud party, including the bill to put cameras in polling stations, which emboldened the Arab sector to get out and vote, because they were accused of trying to steal the elections," says Makladeh.

"Netanyahu's scare campaign turned into a double-edged sword. While he's trying to get votes from the right using scare tactics, demonizing the Arab sector, he actually made the Arab sector get up and vote."

Shweiry also came out against Likud's scare campaign, comparing it to anti-Semitism in Europe.

"This is the pinnacle of racism, but this is Likud's way," says Shweiry. "If a European politician had posted something like Netanyahu's Facebook post (saying "the Arabs will destroy everyone"), but about Jews, riots would have broken out. This is racism."

Members of the Bedouin community in the Negev heading to the polls on Election Day, Sept. 17, 2019 (Photo: AFP)

The only Arab community in which Likud is expected to win a majority of the votes is the Druze village of Yarka in northern Galilee, place of residence of Likud MK Fateen Mulla.

During Election Day, some irregularities were discovered in the village; voting was briefly suspended and then the polling hours were extended until midnight to compensate for the suspension. Anwar Saab rejects these claims of tampering.

"There were several isolated incidents, also in the past, but you can't blame it on the entire community," says Saab. "Even if it were true, it is wrong, but it shouldn't turn into a stigma."