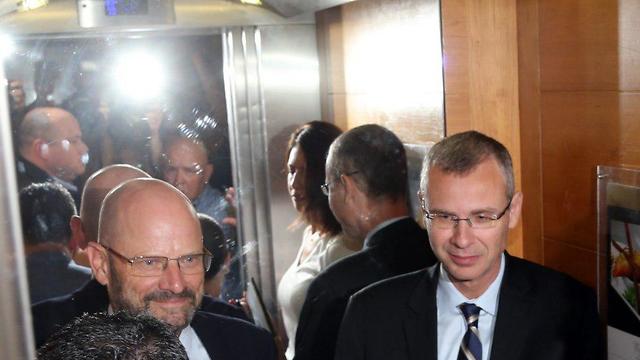 Likud, Blue and White move ahead in unity talks as leaders agree to meet again

Neither party optimistic after Netanyahu-Gantz talks with Rivlin, but the two party heads and president will hold further discussions Wednesday with both negotiating teams on standby should there be progress on forming government

The negotiating teams for the two largest parties are holding their first meeting Tuesday to discuss forming a unity government at the request of President Reuven Rivlin, after the respective party leaders, Benjamin Netanyahu and Benny Gantz, held talks on the issue Monday night.

The two leaders have agreed to meet again on Wednesday and the negotiating teams, headed for the Likud by Tourism Minister Yariv Levin, and for Blue and White by Ehud Olmert's former chief of staff Yoram Turbovich, will be waiting outside during the meetings should there be progress.

Minister of tourism Yariv Levin representing the Likud said there is much to do. "It is not only up to us, there is another side too" he added.

Despite Monday's positive atmosphere, neither party has expressed much optimism and both say the gaps between them are extemely wide, and that the meeting did not actually advance them a single step on the core issues.

For example, Blue and White envisions a secular government that will promote civil marriage, allow supermarkets to open and public transportation to operate on Shabbat in certain cities, pass a bill for the draft of Haredi men based on existing outlines, limit a prime minister's term in office and more.

For the Likud, which leads a firmly right-wing bloc built around the ultra-Orthodox parties, none of these terms can be met.

The other major sticking point is the issue of a rotating prmiership as part of a unity government.

Gantz insists on being in office first, and it is unclear whether Netanyahu would accede to such a demand.

With these divisions appearing difficult to overcome, senior political figures believe that despite the goodwill, the more logical scenario at this stage is a new round of elections.

Neither Likud nor Blue and White could muster enough Knesset seats in the September 17 elections to form a clear majority coalition.

Blue and White emerged with a slight advantage by winning 33 out of 120 seats, with Likud gaining 31 seats. Netanyahu's right-wing bloc has 55 MKs, while Gantz's center-left amalgam has 54.

Netanyahu held a conference call with his right-wing party bloc soon after the meeting.

The prime minister said he had emphasized the fact that he represents the entire bloc and that any negotiations would be in that capacity.

"I am committed to what I promised you," he said.

He added that the conversation with Gantz was a serious one.

"It's a start," he said, but warned that, "it's too soon to know" where the discussions will lead.

In in a statement released after the meeting, Blue and White accused Netanyahu of not being honest and was pushing the country towards a third round of elections in less that a year, because he believes he will be able to get the 61 out of 120 Knesset seats he needs to form a coalition.

Gantz, meanwhile, said after the meeting that he had insisted to Netanyahu and Rivlin that unity was the promise he had made to his electorate, but it was his party that must lead.

"We were elected because our voters wanted change and we have no intention of relinquishing our responsibility to lead that change along with our natural partners," he said.

Rivlin called the Monday meeting a significant step forward, but that direct dialogue and trust must be established.

He added that in his view, a transitional government was hurting Israeli citizens and the state's ability to meet the challenges it faces.

"The people expect you to find the solution and prevent another election," he told Gantz and Netanyahu, adding that "this is not the time for boycotts" of negotiations between parties.