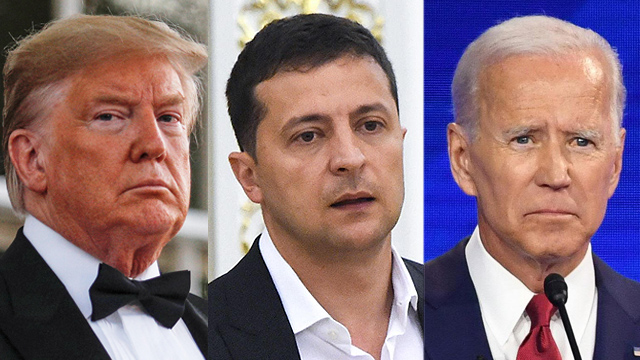 In the exchange, U.S. president raises unsubstantiated allegations that ex-VP sought to interfere with Ukrainian investigation of his son; conversation is part of whistleblower's complaint central to formal impeachment inquiry launched by Pelosi

In the call, Trump raised unsubstantiated allegations that the former vice president sought to interfere with a Ukrainian prosecutor's investigation of his son Hunter.

L-R: Donald Trump, Volodymyr Zelenskiy and Joe Biden (Photos: AFP, Getty Images and Reuters) (Photos: AFP, Getty Images and Reuters)
"There's a lot of talk about Biden's son, that Biden stopped the prosecution and a lot of people want to find out about that," Trump said to Ukrainian President Volodymyr Zelenskiy. The conversation between the two leaders is one piece of a whistleblower's complaint, which followed the July 25 call. The complaint is central to the formal impeachment inquiry launched Tuesday by House Speaker Nancy Pelosi. The release of the rough transcript set the parameters of the political debate to come, with Trump dismissing it as routine and Democrats saying it laid the ground for an impeachment inquiry. The connection to Attorney General William Barr marked a new and potentially more serious issue for Trump because it shows he took steps to involve the U.S. government with a foreign country to investigate a political rival. Trump aides believed that his oblique, message-by-suggestion style of speaking would not lend itself to the discovery of a "smoking gun" in the transcript. His messages to his staff were at the center of special counsel Robert Mueller's investigation into obstruction of justice in the Trump-Russia case. One example in the transcript: Trump says to Zelenskiy, "I would like for you to do us a favor though because our country has been through a lot and Ukraine knows a lot about it." Trump has recently confirmed that he ordered the freezing of nearly $400 million in aid to Ukraine a few days before the call. The president has insisted he did nothing wrong and has denied that any request for help in procuring damaging information about Biden was tied to the aid freeze.

The transcript of the conversation between Donald Trump and Volodymyr Zelenskiy (Photo: AFP)
The president took the 30-minute call from the White House residence, while officials in the Situation Room listened in and worked to keep a record of the conversation, as is standard practice. The resulting memorandum was classified as "Secret' and "ORCON, for "originator controlled," to prevent its spread throughout the federal government or to American allies. It was declassified for release on Wednesday. The release came against the backdrop of the president presiding over a meeting of world leaders at the United Nations, a remarkable split screen even for the turbulence of the Trump era. The inspector general for the intelligence community wrote to the Director of National Intelligence in August that he believed the conversation between Trump and Ukraine's leader could have been a federal campaign finance violation because the president could have been soliciting a campaign contribution from a foreign government, a Justice Department official said.

Hunter Biden (Photo: AP)
The whistleblower -- a member of the intelligence community -- said in their complaint that they had heard the information from "White House officials," but did not have firsthand knowledge of the call, the Justice Department official said.

Prosecutors from the department reviewed a transcript of the call and determined the president did not violate campaign finance law.

The determination was made based on the elements of the allegation, and there was no consideration of the department's policy that a sitting president cannot be indicted, the official said.

The official spoke on condition of anonymity in order to discuss internal investigative deliberations. Justice Department spokeswoman Kerri Kupec said the attorney general was first notified of Trump's conversation with the Ukrainian president "several weeks after the call took place," when the department received the referral about potential criminal conduct. "The president has not spoken with the attorney general about having Ukraine investigate anything relating to former Vice President Biden or his son. The president has not asked the attorney general to contact Ukraine -- on this or any other matter," the spokeswoman said.

Lawmakers have been demanding details of the whistleblower's complaint, but the acting director of national intelligence, Joseph Maguire, has refused to share that information, citing presidential privilege.

He is to testify Thursday before the House, and lawmakers are expected to have access to details of the complaint beforehand in a classified setting.

The complaint has set off a stunning turn of American political events, leading Pelosi to yield to mounting pressure from fellow Democrats on the impeachment inquiry.

House Speaker Nancy Pelosi (D-CA) announces a formal impeachment inquiry into President Donald Trump at the Capitol Building in Washington, DC, Sept. 24, 2019
Congress' probe focuses partly on whether Trump abused his presidential powers and sought help from a foreign government to undermine Biden and help his own re-election. Pelosi said such actions would mark a "betrayal of his oath of office" and declared, "No one is above the law." The impeachment inquiry, after months of investigations by House Democrats of the Trump administration, sets up the party's most direct and consequential confrontation with the Republican president, injects deep uncertainty into the 2020 election campaign and tests anew the nation's constitutional system of checks and balances. Trump, who thrives on combat, has all but dared Democrats to take this step, confident that the specter of impeachment led by the opposition party will bolster rather than diminish his political support. Meeting with world leaders at the United Nations, he previewed his defense in an all-caps tweet: "PRESIDENTIAL HARASSMENT!"