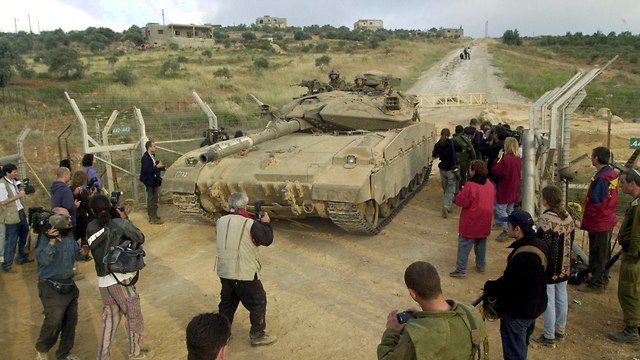 In Lebanon, return of 'collaborators' with Israel reopens old wounds

Amer al-Fakhoury, who had been a senior warden at the infamous Khiyam prison, has gone home, and now the debate over the return of thousands who collaborated with Israel's 22-year occupation has flared up once again

"Collaborators not welcome" reads a roadside placard in southern Lebanon, where debate has flared once again over the return of thousands who collaborated with Israel's 22-year occupation.

The warning stood next to the road leading to Qlayaa, a village nestled among lush, green fields and flowing olive groves.

It was once a bastion of the South Lebanon Army, a Christian-led militia allied to Israel and opposed to the now-dominant Shiite Hezbollah movement.

When the Israeli army withdrew from southern Lebanon in 2000, thousands of SLA members and their families chose to cross the border too and settle in Israel or elsewhere.

In Qlayaa, those residents who remain don't like to talk to journalists, and many homes are abandoned.

"There's more than 100 of them that are shuttered up," says one man, refusing to give his name. "Entire families left and we haven't heard from them since."

When they die, "only a few bodies get repatriated to be buried in the village," he says.

For some, including Hezbollah supporters, SLA members are traitors. Others, mostly from Christian parties, say they are exiles who should be allowed to return.

Ever a hot-button issue, the argument erupted again this month when a notorious former SLA member unexpectedly entered Lebanon.

Amer al-Fakhoury, who had been a senior warden at the infamous Khiyam prison, went into exile more than two decades ago and was sentenced in absentia for collaborating with Israel.

He was detained shortly after his arrival.

A committee comprised of relatives of exiled SLA members estimates that between 2,400 and 2,700 Lebanese still live in Israel, around 1,200 of them Christians from Qlayaa.

Others moved on from Israel and resettled in third countries including Sweden, Germany and Canada.

Most of them had left Lebanon as the Israeli army retreated, for fear of reprisals from the groups they once fought -- particularly Hezbollah.

Years have passed but cross-border tensions still run high between Hezbollah and Israel, such as a cross-border exchange of fire early this month that sparked fears of a broader conflagration.

Those who sided with the occupation are not widely welcomed in the south.

Some residents claim they have severed all ties with their exiled relatives because they "don't want trouble" and fear being accused of spying.

"Every Lebanese has the right to return to their homeland," argued Amin Said, a local official from Qlayaa who has relatives in Israel.

"Let those who have blood on their hands face trial, whatever their affiliations."

But Said admitted that his case is rarely heard.

"The issue of the exiles is a forgotten one," he says. "We have no leverage here, nor do we represent any kind of electoral opportunity."

In 2011, parliament passed a bill enabling the return of Lebanese citizens residing in Israel, but its implementation mechanisms are still under scrutiny at the justice ministry.

Less than five kilometers from Qlayaa lies Khiyam, a mostly Shiite village where Israel and its SLA proxy used to run the prison whose name became a by-word for abuse and torture.

The prison now lies in ruins and Fakhoury is in detention.

Survivors and relatives of former detainees accuse him of torture against Lebanese and Palestinian inmates.

The SLA was formed in 1976 as a splinter from the Lebanese army, whose ranks were divided a year after the start of the civil war. Initially it was called the Free Lebanon Army.

The conflict shifted dramatically when Israel invaded the south in 1978 and the militia started taking its orders from the Israeli army.

The wounds that created, especially in the south, are still fresh.

Fakhoury's return to Lebanon immediately prompted protests, including one in the yard of the old Khiyam prison where demonstrators denounced "the return of the collaborators".

"They're not exiles, they're traitors," snapped Sekna Bazzi during the small protest, which was held on September 15, four days after Fakhoury's arrest.

Most of the people of Lebanon see the those that were in the SLA as traitors due to their past affiliation with Israel (Photo: Avihu Shapira)

A woman now in her fifties, she was detained in the Israeli-run prison for four years for "collaborating with the resistance" -- a reference to Hezbollah -- and eventually released in 1991.

"All those who call for their return are also traitors," Bazzi told AFP, wearing a head scarf and a long black garment.