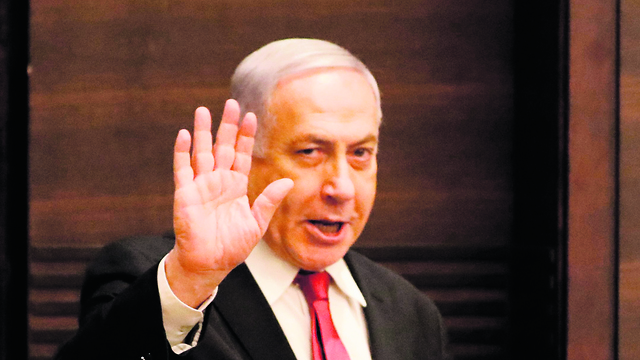 A look at the legal trouble facing Netanyahu

Analysis: PM is set to face the attorney general in a series of pre-trial hearings, where he is expected to deny any criminal wrongdoing in three corruption cases; Mandelblit is expected to decide by the end of December whether to press charges against Netanyahu

Prime Minister Benjamin Netanyahu will attempt to head off a corruption indictment at a series of pre-trial hearings that begin on Wednesday, in which he will try to persuade the attorney-general not to press charges.

The political survival of Israel’s longest-serving leader, who denies any criminal wrongdoing, is also clouded by his failure to win a clear victory in two parliamentary elections this year, in April and last month.

Netanyahu, leader of the right-wing Likud party, heads a caretaker government following the inconclusive September 17 election. He was tapped last week to form a government and has been trying build a national unity coalition with his main rival Benny Gantz, but Gantz says he will not serve in a cabinet led by a prime minister who faces indictment.

Here is a guide to the criminal cases surrounding Netanyahu.

WHAT ARE THE ALLEGATIONS AGAINST NETANYAHU?

Attorney-General Avichai Mandelblit announced in February that he intends to file criminal charges against Netanyahu in investigations listed as cases 4000, 1000 and 2000, pending the outcome of the hearings. Netanyahu could face fraud and breach of trust charges in all three cases, and bribery charges in case 4000.

Netanyahu says he is the victim of a politically orchestrated “witch-hunt” by the media and the left to oust him from office.

CASE 4000 alleges that Netanyahu granted regulatory favors to Israel’s leading telecommunications company, Bezeq Telecom Israel (BEZQ.TA), in return for positive coverage of him and his wife Sara on a news website controlled by the company’s former chairman.

CASE 1000 alleges that Netanyahu and his wife wrongfully received gifts from Arnon Milchan, a prominent Hollywood producer and Israeli citizen, and Australian billionaire businessman James Packer, including champagne and cigars.

In CASE 2000, Netanyahu is suspected of negotiating a deal with the owner of Israel’s best-selling daily newspaper, Yedioth Ahronoth, for better coverage in return for legislation that would slow the growth of a rival daily newspaper.

WHAT IS THE PURPOSE OF THE PRE-TRIAL HEARING?

It grants the prime minister’s legal team a chance to argue against the prospective charges and to convince the attorney-general to either scrap them or to reduce them. It is unclear whether Netanyahu will attend the hearings, scheduled for Wednesday and Thursday and the following Sunday and Monday. After hearing the arguments, the attorney-general is expected to decide by the end of December whether to indict Netanyahu.

WHAT HAPPENS IF NETANYAHU IS CHARGED?

If Netanyahu is indicted it could take many months before his trial begins. Netanyahu could also seek a plea deal rather than stand trial.

If he is still in office as prime minister, Netanyahu would be under no strict legal obligation to quit. According to Israeli law, a prime minister must step down if ultimately convicted, but can stay in office throughout legal proceedings including appeals.

Netanyahu’s supporters in the legislature have said they would support granting him parliamentary immunity from prosecution, but it is unclear whether there are enough lawmakers who would back such a move.

IF CONVICTED IN A TRIAL, WHAT DOES NETANYAHU FACE?