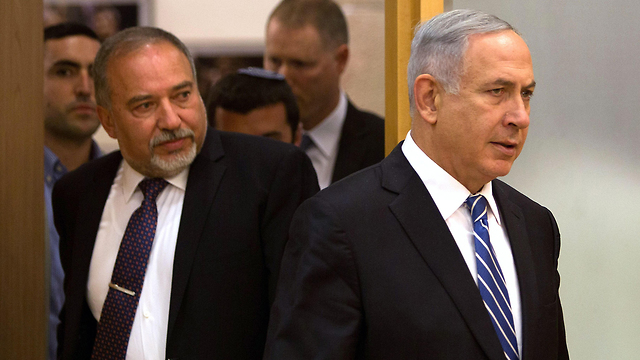 Netanyahu and Yisrael Beytenu leader meet for the first time since the September elections in an attempt to form a new coalition, but Liberman's party says unity government is the only way to go

The meeting between Prime Minister Benjamin Netanyahu and Yisrael Beytenu Chairman Avigdor Liberman appears to have been held in vain as Likud officials say “no breakthrough” was reached during the meeting on the formation of a new coalition government.

Yisrael Beytenu party said that during Thursday’s meeting it was made clear to the prime minister that in light of the security and economic challenges, a unity government is the preferred option. "The right path for forming a government is to jointly create fundamental principles between Yisrael Beytenu, Likud and Blue and White."

For a second day in a row Netanyahu held coalition talks at the same time his attorneys were trying to convince the attorney general not to indict the prime minister on corruption multiple cases, which could see him being charged with fraud, breach of trust and bribery charges.

The meeting was planned after Likud and Blue and White talks on a potential unity government ended without results. "There's no point wasting the country's time," Netanyahu told Liberman in a conversation Wednesday. "We'll meet, see if this is serious or not and based on that make a decision."

In the meantime, Yisrael Beytenu on Thursday published its official plan for the 22 Knesset, set to be sworn in later in the day, which emphasizes the party’s long standing agendas such as drafting the ultra-Orthodox into the military, making core curriculum an obligatory condition for any educational institutions and allowing public transport on weekends.

"A civil union that creates an equal rights opportunity will correct the injustice that at any given moment, there are more than 5000 soldiers who can potentially die for State of Israel but cannot join in marriage,” said the party in a statement.

“Teaching core curriculum should be a condition for becoming a recipient of the schools budget.”