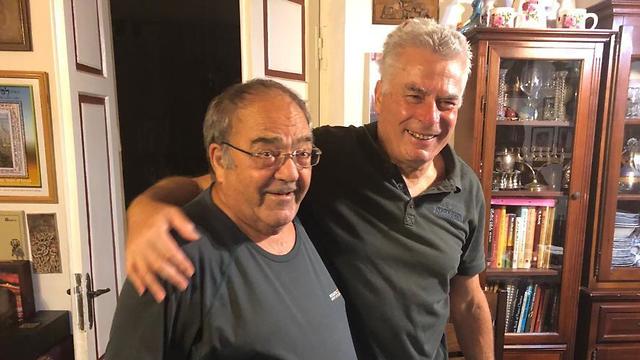 Israeli POW reunites with mentor who helped him survive torture

Capt. Gil Vogel was captured by Syrian troops during the First Lebanon War, and this year, he had the chance to say thank you to the Military Intelligence officer whose advice kept him alive

"What do I have to do if I'm captured? Just give me the quick rundown before my flight," Vogel told Yehezkeli, who goes by the nickname Momo.

This short 20-minute briefing would ultimately save Vogel's life. Two days after the encounter his plane was shot down over Lebanon and he was taken hostage by Syrian troops.

And this Rosh Hashanah, he and Momo met for the first time in almost 40 years.

At the time of Vogel's capture, the First Lebanon War was very much underway and the IAF was making daily sorties deep into enemy territory.

"I knew everything there was to know about survival. I gave pilots the best advice I could, all based on research and witnesses," says Yehezkeli, then a survival expert.

During the week that Momo was giving intense survival briefings to pilots, Captain Vogel, then a young airman, was ill and couldn't make it to the sessions.

To make sure Vogel had some sort of preparation, Momo met him at roadside tavern in Gedera, in central Israel.

"I taught him a few words in Arabic, what to do in interrogations and what to expect during torture. My motto was: You keep a mental distance from yourself, like it's not happening to you. This is the only way you survive," says Momo.

"I explained to him: If your plane is downed, get out only with your flight suit. If you have a gun, get rid of it and if you say you’re an officer, they most likely won't hurt you," adds Momo.

"We opened a bottle of wine and drank a little bit. We wrote on the bottle 'See you after the war' in hopes we would finish it in the future. We parted ways after I felt Gill had taken it all down," says Momo.

Just two days later, on a Saturday morning, Vogel's plane was downed by Syrian gunfire during a sortie over Lebanon forcing him and his navigator, Major Aharon Katz, to eject from the plane.

Katz was killed during the ejection, but Vogel made it to the ground alive. he would be held hostage for two years until 1984. During that time, he experienced painful torture, but did not forget Momo's instructions.

When he was returned to Israel, the first thing he wanted to do was to meet Momo, but unfortunately the meeting did not happen. They tried to meet again several times but with no success. Momo and Vogel eventually retired from the military, with Vogel becoming an El Al pilot.

The years passed without contact, but on the first night of Rosh Hashanah last week, Vogel showed up at Momo's door to surprise him.

"All of a sudden I heard a knock on the door," says Momo. "I opened the door and in front of me stood a tall man saying: 'I'm Gill Vogel!'"

The meeting between the two was orchestrated by military historian Kobi Segal.

"We sat for hours, drinking and laughing. I was so happy to talk to him. For me it's closure," says Momo.