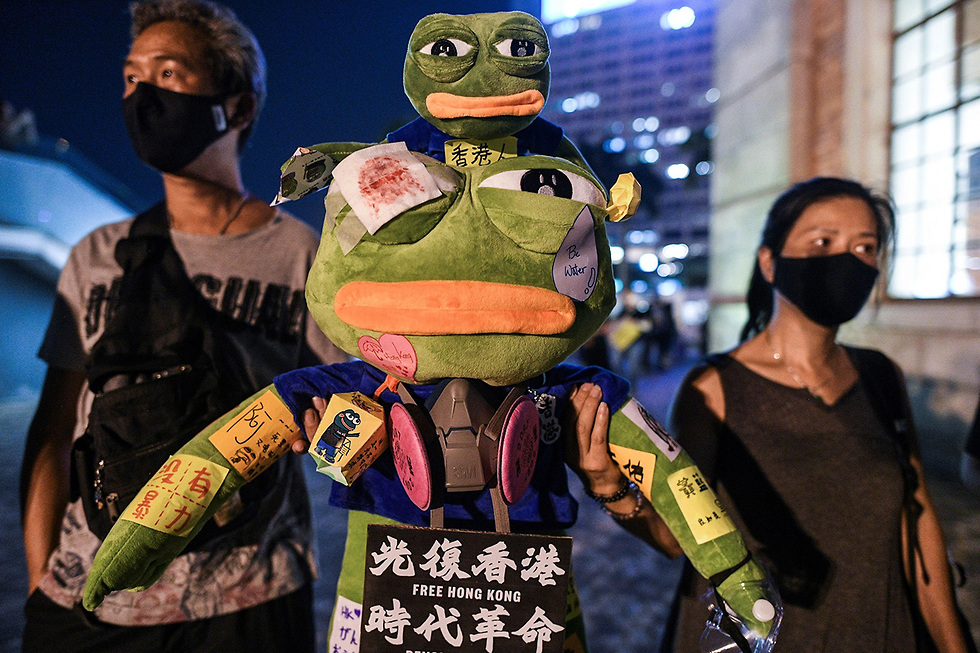 The smiling cartoon frog was a popular internet meme until it got appropriated by the Western far-right, leading its creator to declare his brainchild dead; but now it seems the animated amphibian is having a resurgence in the most unexpected of places

He may have become a far-right internet meme in the West, but Pepe the Frog's image is being rehabilitated in Hong Kong where democracy protesters have embraced him as an irreverent symbol of their resistance.

Throughout the more than 100 days of protests rocking the international finance hub, banners featuring the cartoon frog and stuffed toys of the amphibian have become ubiquitous, providing much-needed moments of levity as the violence escalates.

A battered Pepe doll at a protest in Hong Kong (Photo: AFP)

Some of the Pepe toys brought by the largely young participants were decked in the yellow hard hats and gas masks worn by protesters in their clashes with police.

"In the United States it's a hate symbol, but now it is reborn in Hong Kong as a symbol of love and freedom," a 21-year-old animation student, who gave her name as Phoenix, told AFP.

Pepe is omnipresent at the protests (Photo: AFP)

"Even in a really tough situation, we still want to feel hope and be happy. If we can maintain our minds in a positive way, then maybe we can keep protesting and find a way to win," she added.

Pepe's embrace by Hong Kongers is the latest bizarre twist in the fate of a cartoon character who went from relative internet obscurity to international notoriety.

But it also shows how popular digital trends can mean very different things depending on where you live in the world.

Created in 2005 by American artist Matt Furie as a "chill frog-dude", Pepe became an internet meme within online forums.

During Donald Trump's election campaign, he was embraced by the alt-right and white nationalist corners of the internet, leading Furie to pronounce his original creation dead in 2017.

But in Hong Kong and China, Pepe never had those connotations and was instead known as the "sad frog".

The character became especially popular earlier this year when he appeared within downloadable WhatsApp sticker packs which users add to messages.

When huge pro-democracy rallies broke out in June, young Hong Kongers were already pinging Pepe stickers to each other.

But new protest-themed variations of Pepe quickly emerged, transforming him into a pro-democracy Everyman.

Soon Pepe was being graffitied onto sidewalks, plastered across protest "Lennon Walls", even painted on fingernails.

Many of those at Monday's rally said the quirky nature of Pepe provided some light-hearted relief in a dark time.

A day after the Pepe-themed protest the city saw the most violent clashes to date as China celebrated 70 years of Communist Party rule.

"Because we have the masks on our faces, we have to express our feelings in other ways," explained Dennis, a 26-year-old physics graduate who has set up an Instagram account that gathers the new Pepe memes.

In Hong Kong, he is no longer just mainland China's "sad" frog meme. Instead he is a defiant expression of the frustration many Hong Kongers feel under China's rule and its Beijing-loyalist local leaders.

"My own definition is that Pepe is for the people, in contrast to the 'Popo' - the police - who are not," he said.

Protesters are increasingly aware of Pepe's inadvertent connection to the far right.

When the New York Times ran an article in August on the controversial character's adoption in Hong Kong, it sparked an extensive debate on the online forums and social media platforms used to organize the protests.

Would continuing to use their much-loved icon harm their cause?

A consensus appeared to emerge. Hong Kong's Pepe was a distinctly local meme and if his notoriety in the West would help keep international attention focused on the protest movement, so be it.

Phoenix believes Pepe is both a symbol of the protest movement but also a rejection of the idea that anyone else - be it Beijing or the West - gets to speak for them.

"He could represent a lot of things, so he is what we make it. For me that's about freedom," she said.