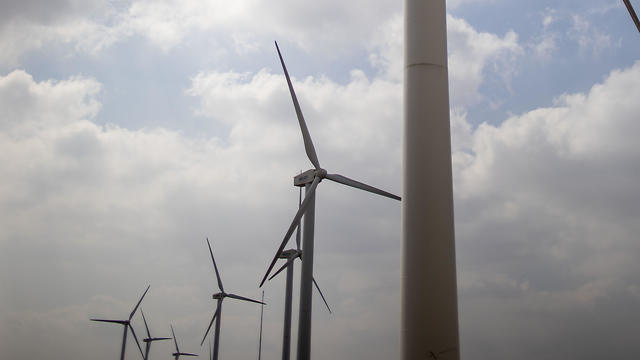 Israel has made it goal to veer its energy production increasingly toward clean means, but turbines present slew of concerns for local Druze population

Towering wind turbines may soon jut up from the picturesque patchwork of Druze farmland on the Golan Heights, angering villagers who see the project as a threat to their agrarian way of life, an encroachment on ancestral lands and a solidification of Israel's occupation of the territory.

Jewish communities have also opposed similar renewable energy projects, but the Druze view their predicament as particularly challenging. Claiming they were duped into signing on to the project, they are a largely disenfranchised minority with no national political representation, hobbling the chances for a successful struggle against a state driven to wean the country off fossil fuels.

"I can't imagine how I will tend to my orchard and my trees under a 200-meter (660-foot) high monstrosity," said Emil Masoud, a Druze farmer and the secretary of a local agricultural collective. "We don't oppose renewable or green energy. We oppose projects that threaten us as residents, as well as our rights over our lands and orchards".

Israel captured the Golan Heights from Syria in the 1967 Six-Day War and annexed the territory in 1981 - a move that was not internationally recognized until the Trump administration did so this year. No other countries have yet followed suit.

In contrast to the Palestinian territories captured in 1967, the Golan has remained quiet under Israeli rule. The Golan's 26,000 Druze, belonging to a secretive offshoot of Islam, hold Israeli residency status that gives them the right to travel and work freely.

Residents speak Hebrew and the Golan, with its rugged landscape and many restaurants, is a popular destination for Israeli tourists.

But most of the Druze residents have chosen not to take Israeli citizenship, and many still feel inextricably linked to Syria. Without citizenship, they do not vote in national elections and therefore have no elected representatives in Israel's parliament.

And while local elections were held for the first time last year following decades of state-appointed local government in the area's four Druze villages, the vote suffered from low turnout by disenchanted residents who saw it as another attempt to cement Israel's hold on the territory. Many view the newly elected councils as not representative.

"No one takes them into account in decision-making and no one defends their rights in Israeli politics," said Oded Feller, a lawyer with the Association for Civil Rights in Israel, which is challenging the wind project alongside the Druze. "That means it's possible to quickly advance a project that harms their rights without them having recourse to the proper defense".

The renewable energy project, which still needs final approval from the government and could take many months before breaking ground, would see up to 31 wind turbines, each at a height of about 200 meters (660 feet), erected around the apple, cherry and almond orchards that emboss the rolling green hills surrounding the Druze villages.

During the apple harvest last month, farmers ferried mounds of crisp red fruit on clanging tractors on the narrow, winding roads that snake between the terraced agricultural plots and the area's tapestry of orchards.

Israel has made it a goal to veer its energy production increasingly toward clean means, with wind power an important component of those plans. In a statement, Israel's Energy Ministry said the Golan Heights, with its high altitude and wind-swept valleys, is an optimal location for wind farms.

But the Druze say the turbines present a slew of concerns. They contend that the giant, soaring poles and the infrastructure needed to construct them will impede their ability to work their plots, exacerbating their already tenuous economic situation, which has grown dire since the war in Syria halted their exports to a key market.

They also say the turbines will disturb the almost sacred bond they feel to their land, which is passed down by generation and where families flee their cramped villages for fresh air and green space.

Landowners who signed lease agreements with Energix, the company behind the project, say they weren't made aware of the potential implications of having a turbine on their plot. They say they were tempted by hefty sums into signing what they describe as draconian leases that, coupled with a boycott on the company imposed by influential religious leaders, has prompted many to want to withdraw.

Emil Masoud's uncle, Noraldeen Masoud, is one of them. As he picked apples in what may eventually be the shadow of a spinning turbine, he said he felt misled by the company and skeptical of the state's motives.

"Our land is as valuable as our lives. If our land goes, our lives go," he said. "How can it be that the state of Israel is willing to carry out a project like this when most of the population opposes it"?

For some, the turbines will serve as both a symbol of, and a foothold for, Israel's occupation of the Golan Heights.

"Like settlements in the West Bank, these are facts on the ground. As facts on the ground increase it makes any future deal between Syria and Israel problematic," said Nizar Ayoub, director of the Al-Marsad rights group in the Golan Heights.

Energix did not respond to requests for comment, but in a 2018 report on the potential environmental effects of the project, the company said any land harmed while building the turbines would be restored for agricultural use.

Eitan Parnass, who heads the Green Energy Association of Israel, of which Energix is a member, disputed the Druze's concerns. He said farmers worldwide continue to work their land, even if it hosts a turbine and added that the fight against climate change trumps their claims.

"If green, clean and cheap energy can be produced near their homes, they need to take part in this global effort," he said.