An aerial view of the site
Photo: Israel Antiquities Authority 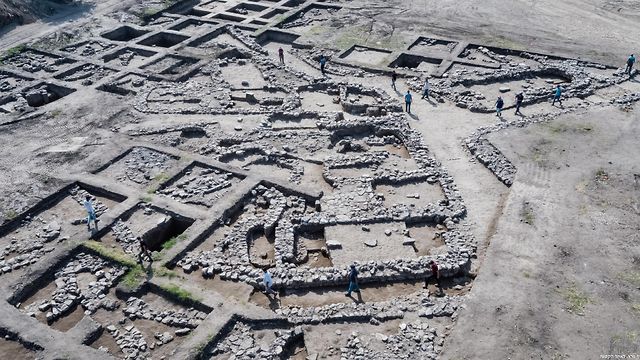 A sprawling 5,000-year-old city that experts compared to an "ancient New York" was discovered some 50 kilometers from Tel Aviv by workers preparating to build a new highway to the town of Harish.

According to the Israel Antiquities Authority, the city spread across 65 hectares (160 acres) and was inhabited by approximately 6,000 people, a very large number for the time.

The Israel Antiquities Authority says that the ancient city, which is located in an archeological site in Ein Esur near Wadi Ara, is from the early Bronze Age (3,300–2,100 BCE) and was surrounded by a fortified wall, and included residential and public areas, streets and alleyways.

In digs that go even deeper beneath the houses of the city, an even earlier settlement was discovered, and is believed to be from the Chalcolithic Era (Copper Age) approximately 7,000 years ago.

According to the Israel Antiquities Authority, is seems two bountiful springs were located in the area and were the main attraction for of people during the two eras.

The dig is funded by the National Roads Company of Israel and managed on behalf of the Israel Antiquities Authority by Itai Elad, Dr. Yitzhak Paz, and Dr. Dina Shalem.

"The city was the New York of the area in the early Bronze Age - a cosmopolitan city where thousands of people lived together. There's no doubt, this discovery changes everything we know about ancient Israel, its people, and their way of life," the three said.

"It's a truly fascinating era in the history of Israel, better known as Canaan in those days, when the population was going through radical changes, the structure of rural populations was giving way to a kind of urban living."

The three stress the significance of the discovery, and claim the city is "the first steps of the Canaanites on the land."

"It's here that they're forming their identity as a culture through urban cities, and here lies the significance of the discovery, a city like that couldn't have come to fruition without a guiding hand, and an administrative mechanism behind it." they said.

"The city's impressive planning, and the fact that imported Egyptian tools were found in the area both prove that the city was a huge, megalopolis in the time of the Bronze Age, where thousands lived, made their living farming, and traded with different cultures and kingdoms in the area of Canaan."

Various discoveries in the city offer a glimpse into the belief system of the population.

"In the city's public area, archeologists discovered a complex for ritual, a kind of temple, of extraordinary size, and in its yard stands a giant stone meant to hold liquid. The stone was apparently used in rituals that took place in the temple,"  they said.

"Inside the complex, a device was discovered filled with the charred bones of various animals, indicating the practice of sacrificial rituals, alongside rare effigies depicting the head of a man, and another of a man with his hands held high with an animal besides him.

"Discoveries like these, offer us a glimpse beyond the stone walls of the city, and into the spiritual everyday lives of the people that used to live there."

The Antiquities Authority says the find finally defines the characteristics of the ancient culture that inhabited Israel in ancient times.

We now know they made their living farming, thanks the city's proximity to the fountains and the wide open spaces used for crops.

The remains of residential buildings, various constructs and public structures are also proof of an organized society based on social hierarchy.

During the dig, millions of fragments of imported pottery, flint tools and stone vessels were discovered at the site.

Following the recent discovery of the one of a kind historical site, the National Roads Company of Israel made changes to its highway plans in order to keep the ancient city intact.

The archeological remains will be documented using advanced methods, studied by the Authority's researchers, and the highway will be built high above the city's ruins so that the ancient site might be preserved for future generations.

Approximately 5,000 teenagers and various volunteers took part in the dig as part of the Antiquities Authority's Heritage Project, which aims to establish emotional connections to the past, cultural ties, and sense of belonging to Israel and the preservation of its antiques and history.

Among the volunteers were local students, participants in pre-military preparatory, archeology students, soldiers, special education students and groups of both Arab and Israeli students who arrived with the help of the international SHARE organization.

Noa Shaul, a guide on behalf of the Antiquities Authority said: "The challenges of the archeological site for the students, along with discovering various relics, helped their personal development and their familiarity with Israel, its sites and its history."