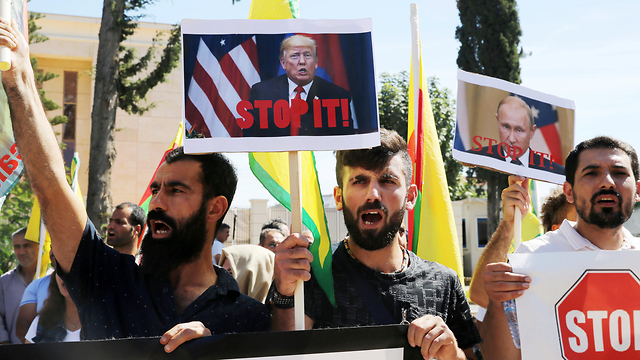 Yom Kippur for the Kurdish people

Analysis: Turkey's geopolitical machinations and American abandonment spell the end of any hopes for Kurdish autonomy; this alone is tragic enough, but the realignment of the region could mean trouble for Israel too

Turkey's President Recep Tayyip Erdogan began on Wednesday to deliver on his promise to take over a 40-kilometer strip of Syria, near the Turkish border - an area inhabited and administered for the most part by Kurds.

This plan, now possible thanks to the inexplicable decision of U.S. President Donald Trump to step back and allow it, will bring about a humanitarian and geo-political disaster.

Kurds in Cyprus protest against the Turkish operation in northern Syria (Photo: EPA)

Turkey had been providing almost public support for the Islamic State throughout the years of fighting, beginning with the Syrian civil war.

According to testimony provided by Kurdish fighters combating IS, Turkish officers were working within Islamic State, with the expressed intent to take control of the north-eastern provinces of Syria, an area the Kurds call Rojava.

In the initial stages of the quick Islamic State expansion late in 2004, the organization seemed unstoppable. Still Turkish troops across the border refrained from providing any assistance to the Kurdish city of Kobani fighting for its life.

The Islamic State attack on the Kurdish city of Kobani (Photo: Reuters)

But Kurdish bravery, with help from the PKK, a Kurdish militia based in Iraq (with a political presence in Turkey), and the YPG, a component of the anti-Assad Syrian Democratic forces, along with aerial cover from U.S. bombers and a critical weapons supply line, enabled the Kurds to block IS from taking Kobani - at a cost of 2,500 fighters.

That victory became the turning point in the fight against the Islamic State.

Next the Kurds turned their attention to Sinjar, which had fallen to Islamic State in 2014 and where the predominately Yazidi population that was unable to escape was killed or enslaved.

Kurdish forces began an offensive early in 2015, with American help, to retake the city and ultimately unite Kurdish territory creating a land bridge to the sea.

Turkey viewed that American–Kurdish cooperation with discontent, prompting a 2016 Turkish incursion into the area that continued until the 2018 Turkish occupation of the city of Afrin, using local pro-Turkish militias and pushing out the Kurdish forces.

The local Kurdish Autonomy government in the city of Qamishli has been under bombardment by Turkish forces in the last few days, as a prelude to the expected land incursion.

Ankara's goal is to finally put an end to the Kurds' aspirations for autonomy and independence. Erdogan's government has not tried to hide that intent or their plan to imprison or kill all YPG or PKK fighters.

The Turkish plan is also to settle some 3 million Syrian refugees currently seeking refuge in Turkey, in the 6,000 kms strip it plans to secure.

In order to make sure the message was well received in Europe, Turkish officials dispatched thousands of refugees towards the Greek islands as a warning of what may follow if they were to be blocked from their resettlement plans in Syria, regardless of the cost to the Kurds.

Turkish President Recep Tayyip Erdogan is depicted as Hitler in a pamphlet that appeared in northern Syria after U.S. troops pulled back

Kurdish refugees, for the most part have chosen to remain in the de facto independent territory in Syria rather than travel to Europe, protected by their own fighters and financed by the oil reserves of the area.

But the Turks hope to install a pro-Turkish population of Arabs and others to ensure that an independent Kurdish region is not a viable option.

Tens of thousands of Islamic State fighters and family members have been interned in camps set up and guarded by the Kurds after the fall of the Islamic State.

Erdogan's forces plan to release these people into the area at an obvious cost of Kurdish lives. This is a plan that was foiled when it was first introduced five years ago, thanks to the Kurds' close cooperation with U.S. forces.

The demise of a Kurdish independent democracy is tragic, and its annihilation will deal a fatal blow to the already battered American reputation.

After the failure of the U.S. administration to act against Iranian aggression in the Gulf, this latest policy u-turn must be seen as a dire warning to anyone who may still believe the United States can be trusted as an ally.

The Iranians view the current state of affairs as a threat to Shi'ite dominance in Syria while the Russians expect Kurdish forces to call on them to prevent a massacre by the hands of Turkey.

And Israel? Israel should worry about the Turkish military, second only to the Russians in Europe, as it creeps closer to its borders and threatens its ability to act independently against the range of threats it is facing.