Police at the scene of an attempted massacre at a synagogue in Halle, Germany on Yom Kippur
Photo: Oded Tartman 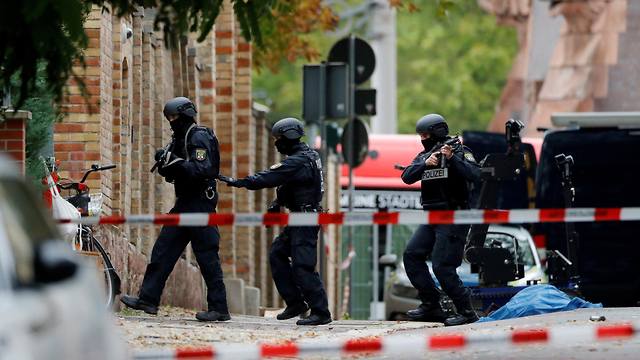 For Israeli Jews, anti-Semitism is someone else's problem

Analysis: Jewish communities around the world are living in fear as hate crimes against them continue to rise, but in Israel, they believe the choice is clear even as the country's leadership makes no real effort to entice members of the Disapora to make aliyah

Despite the terrible images emerging from Germany on Yom Kippur, the Israeli public is again not expected to engage too much in the ugly anti-Semitism that has long since lifted its monstrous head and stifled every good part of humanity and coexistence.

Israelis have no real will to take an interest in the fate of Diaspora Jews. After a usual round of tutting, Israelis return to their daily pursuits, quickly forgetting the woes of their Jewish brethren.

Police at the scene of an attempted massacre at a synagogue in Halle, Germany on Yom Kippur (Photo: Reuters)
And that is the best case scenario. In reality, most Israelis are not at all interested in what happens beyond the borders of their country.

Diaspora troubles are less than bothersome to the average Israeli, and the Israeli establishment is devoid of any real influence.

Ask the Jews of France. They will tell you that the State of Israel under by Benjamin Netanyahu engaged in some nice rhetoric, but in practice did very little to allow thousands of educated Jewish French nationals to find a home in Israel.

There were certainly programs and a great of discussion, but very little action. French Jews certainly immigrated, just not to Israel. In fact they mainly went to the UK.

And that is another chapter in the story of European Jewry that has been treated with insufferable amateurism – let's just see what happens if Jeremy Corbyn manages to rise to power.

Several months ago, in a small closed forum discussion, Jewish Agency Chairman Isaac Herzog expressed deep concern about Israelis' limited interest in the manifestations of anti-Semitism spreading around the world.

Jewish Agency Chairman isaac Herzog (Photo: Amit Shabi)
Herzog, who spends no small amount of time roaming among Jewish communities in Europe and the U.S., has heard first-hand the testimonies of Jews who feel threatened in places they have considered safe for decades.

What he hears there, he tries to pass on to the Israeli public here - but hardly anyone in Israel is interesting in buying what Herzog is trying to sell.

And it's not that there's nothing to sell. European human rights organizations have warned that reports published in Europe about anti-Semitic is a drop in the ocean compared to what is actually happening on the ground.

Jews do not always feel secure enough to complain when something bad happens, either because of a lack of confidence in the authorities' willingness to tackle anti-Semitism, or because they fear that some of those who are supposed to uphold the law have a tendency to hate Jews.

A man looks at the memorial for the 11 people murdered at Tree of Life syangogue in Pittsburgh last year (Photo: AP)
One way or another, large numbers of anti-Semitic incidents go unreported and untreated. Many Jews are living with a sense of fear that permeates their everyday lives and harms their overall sense of security.

Data presented earlier this year at the American Jewish Congress conference in Washington revealed that Jews' sense of security, even in the United States, is indeed declining, and in Europe this trend worsens with every passing day.

What happened on Yom Kippur in Halle is a horrifying expression of what is happening on the ground, and if it weren’t for the well-guarded gate that prevented the anti-Semitic murderer from actually entering the synagogue - who knows what slaughter could have happened.

Don't come crying to us

Yet it is hard to blame Israelis for ignoring the issue or being disinterested.

Israeli existence is hardly uneventful at the best of time, and the problems faced by Jews who choose to live their lives outside the borders of the Jewish state are the problems of the privileged - at least to many Israelis.

Its message: Israelis, perhaps rightly, believe that if you want to be Jewish, you'd better live in Israel - not in exile.

And if you choose to live in exile, don't come whining to us. Anti-Semitism is a way of life for others, not for Israelis.