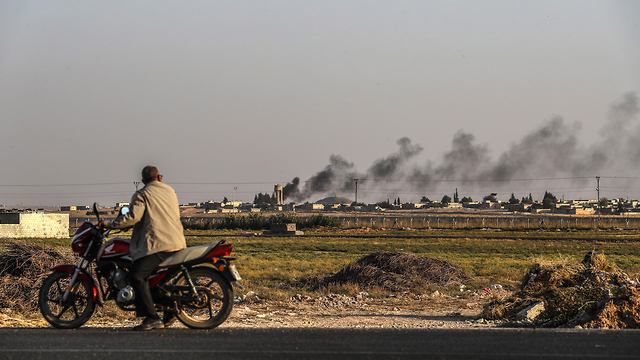 Move could trigger military confrontation between Syrian army and Turkey as well as resurgence of Islamic State, after Trump pulls U.S. troops from area

Syrian forces Sunday entered the Kurdish city of Manbij in Northern Syria following a deal struck between the Kurds and the Assad regime.

This latest move could bring about a military confrontation between the Syrian army and Turkey as well as the resurgence of ISIS that had already been defeated, while U.S. President Donald Trump backs out of the area leaving it to the control of Assad's chief ally, Russian President Vladimir Putin.

Syrian Kurdish officials say they will work with the country's central government in Damascus to fend off Turkey's offensive against Kurdish fighters.

They're pulling out because of the chaos caused by Turkey's rolling offensive, which began five days ago. Ahead of the Turkish invasion, President Donald Trump ordered U.S. troops to step aside, a decision the Kurdish allies saw as a betrayal.

Turkey and allied fighters swept into northern Syria, clashing intensely with the Kurdish fighters. U.S. troops found themselves caught in the middle, and the decision was made Sunday to pull out.

Turkish invasion into Kurds territory in Northern Syria (Photo: EPA)
The Kurdish-led force had shrugged off Damascus' rule in 2012 at the height of Syria's civil war, when the Syrian government pulled out troops to focus on the fighting elsewhere.

Syrian state TV says government troops are moving to the north to confront an ongoing Turkish-led invasion of northern Syria but gave no further details.

A Syrian Kurdish official and a war monitor also said Sunday that Syrian government forces were poised to enter Kurdish-controlled towns, from which U.S. troops are withdrawing amid the Turkish offensive.

The Kurdish official would not disclose details but said a deal with Syrian Kurdish forces through Russia has been reached to deploy government forces in certain border towns. The official spoke on condition of anonymity because an official announcement has not yet been made.

The Syrian Observatory for Human Rights said the deal covered the towns of Kobani and Manbij. U.S. troops have been deployed in the towns after they were cleared of Islamic State militants in 2015.

The announcement comes after U.S. officials said American troops are withdrawing from northern Syria amid the unfolding Turkish offensive against the U.S.-allied Kurdish fighters.

Turkey's official Anadolu news agency says Turkey-backed Syrian forces have advanced into the center of a Syrian border town, Tal Abyad, on the fifth day of the Turkey's military offensive against Kurdish fighters in Syria.

The Britain-based Syrian Observatory for Human Rights, a war monitor, said Sunday that the Turkey-backed forces had "near full control" of the town.

Sporadic gunfire and an occasional mortar round could still be heard hitting Tal Abyad from just across the border in the Turkish town of Akcakale. There were some celebrations in Akcakale, with people waving Turkish flags.

The Turkish government views the Syrian Kurdish fighters as terrorists because of their links to an insurgency in southeast Turkey. But those same Syrian Kurdish forces were a key U.S. ally in the war against the Islamic State group.

Turkey has vowed to carve out a "safe zone" inside Syria along the border.

The Syrian Kurdish fighters had themselves captured the town from IS in 2015.

NATO member Turkey views the Syrian Kurdish fighters as terrorists because of their links to an insurgency in southeast Turkey. But those same Syrian Kurdish forces were a key U.S. ally in the war against the Islamic State group.

Turkey has vowed to carve out a "safe zone" inside Syria along the border.

Without specifying which countries made a mediation offer, Erdogan asked: "What kind of prime minister, what kind of head of state are those who offer to mediate between us and the terror group?"

Turkey, the U.S. and the European Union all designate the Turkish-based Kurdistan Workers' Party, or PKK, as a terror group.