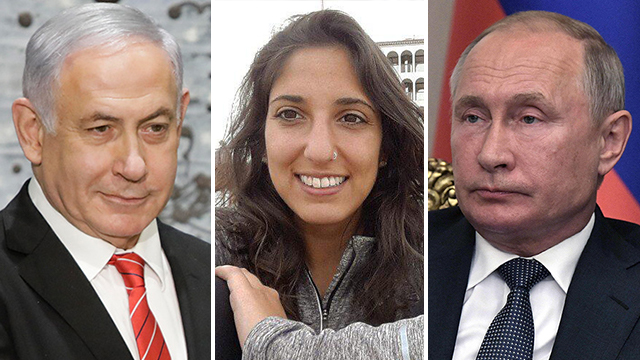 Naama Issachar is serving a 7.5-year sentence in Russia for having 9 grams of marijuana in her bag during a stopover in Moscow en route from India to Israel in April

Prime MInister Benjamin Netanyahu has submitted an official request to Russian President Vladimir Putin for clemency for an Israeli woman jailed in Russia over drug offences, his office said Tuesday.

Naama Issachar, 26, was arrested on April 9 while in transit in a Moscow airport, en route from India to Israel, and accused of carrying 9 grams of cannabis, her family said. Russian authorities charged her with drug smuggling.

Her family says she is being punished disproportionately to pressure Israel into freeing a Russian held in Israel on a U.S. extradition request.

"Naama made a grave mistake and has admitted her crime, but in the case of a young woman with no criminal record, the severe sentence handed down will have a deeply destructive impact on her life," Rivlin wrote in a letter to his Russian counterpart.

"Because of the particular and individual circumstances of Naama Issachar’s case, I am appealing to your mercy and compassion with a request for your personal intervention to grant her an extraordinary pardon,” Rivlin wrote.

Naama's lawyer, Alexander Teitz, visited her Tuesday afternoon and said that the young woman "was overwhelmed by the great support she received from Israel and Jews around the world."

The lawyer said his client "had a lot of questions about yesterday's appeal and the ongoing court process. I told her about the possibility of extraditing the Russian hacker to the United States, she received the news with great courage and expressed hope that Israel will ultimately be able to release her from prison in Russia."

"I want to believe that (the extradition) will not happen, it would be terrible," said Naama's mother, Yaffa Issachar.

"It doesn't make sense, they won't hand him over to America when my daughter is a bargaining chip," she said.