The British teen arrives at court in Cyprus in August 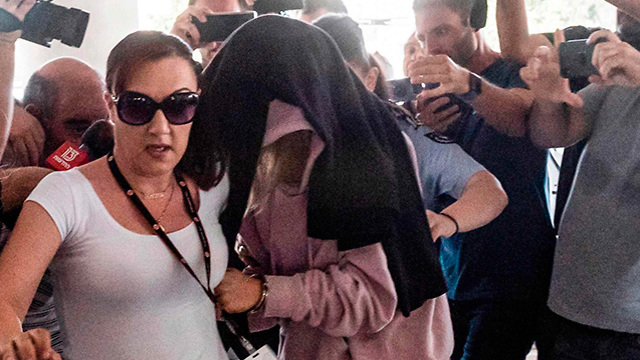 Unnamed 19-year-old says she was pushed by Cypriot authorities to retract claims of gang rape by 12 young Israelis at hotel in Aiya Napa in July; I felt my life was in danger,' she says

The British young woman who is accused of falsely filing a gang-rape charge against 12 Israeli tourists gave her first testimony at her trial in Cyprus on Tuesday.

At the court in the city of Paralimni she recalled the incidents of the night in which, according to the 19-year-old, she was coerced to retract from her initial complaint of being gang-raped by Israeli teens in Aiya Napa.

The British teen arrives at court in Cyprus in August (Photo: AFP)

The teen said that she was immensely pressurized by the Cypriot investigators, in order for her to admit to making a false accusation, Haaretz newspaper reported. When asked by her defense lawyer if she was raped, she answered affirmatively.

“I feared for my life,” the teen was cited by Haaretz as saying during the trial and explained that she didn’t believe the investigators would let her go unless she signed a confession document proposed to her.

She told the court that one of the investigators kept telling her that “clearly there was no rape” in the case and that he has a video from the night of the alleged rape where she is seen having consensual group sex.

Asking to see the video, the investigator refused, the British woman said in her testimony.

Following their exchange, she left the room of the investigators because of her PTSD syndrome, the teen said in the courtroom. On Wednesday, she is expected to be cross-examined on the witness stand.

If convicted, she could face up to one year in prison and a fine of around $1,850.