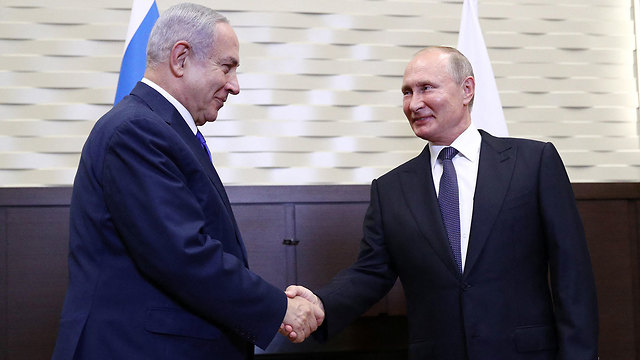 Opinion: The PM has made political capital of his friendships with world leaders, primarily Trump and Putin; but the American president is increasingly isolationist and unstable and the Russian leader is holding an Israeli hostage on trumped up drug charges due to an extradition row

In recent years, Benjamin Netanyahu has managed to position himself as the leader closest to the world's two most powerful people – Russian President Vladimir Putin and U.S. President Donald Trump.

It is likely that he has met with each of them and/or talked to them more than any other leader - and this has definitely helped him.

Two other leaders, Brazilian President Jair Bolsonaro and Indian Prime Minister Narendra Modi, have also become Netanyahu's friends, as did the Eastern European bloc, which he recruited as a counterbalance in the European Union.

The same is true of a host of African leaders who came to Nairobi during a visit by Netanyahu in 2017, eager to meet with the leader who depicted himself as a member of the same league in which the world's superpowers play.

Overt and covert Israeli relations with the Gulf states can also be credited to Netanyahu, but something has changed in front of our very eyes in recent weeks.

A major part of Netanyahu's power stems from his special relationship with Trump, but Trump insists on justifying all the allegations against him - and he is no longer the world's strongest leader.

The American president makes odd decisions, the last and most dramatic of which is the abandonment of the Kurds in Syria, and even before that – Trump's indifference to the Saudi issue.

The Saudis are flirting with Putin, who arrived for a visit to the Saudi capital Riyadh on Tuesday, and are talking - albeit indirectly - with their enemy Iran.

Meanwhile, Putin is busy becoming the most powerful man in the Middle East.

It is still unclear what is going to happen in northern Syria and the love rectangle between Russia, Turkey, Iran and Syria; but we can assume that Putin, who has assumed the role of conciliator, will come out of this all the stronger.

Netanyahu's special relationship with Putin has been put to the test, following backpacker Naama Issachar's bizarre 7.5-year prison sentence for possessing a few grams of marijuana during a stopover at a Moscow airport en route from India to Israel.

This was no fair legal process, but rather a show trial – for this is how a system that runs according to the interests of its all-powerful leader operates.

This is not the time to preach morality about Russia's judicial system, but it is time for Netanyahu to take advantage of his special relationship with Putin and overturn this unfounded and insane verdict.

Issachar should not have to pay the price for a dispute over the extradition of a Russian hacker to the U.S., but Putin has taken her hostage and Netanyahu's task isn't simple.

Hopefully he'll succeed, but one thing seems clear: the strategic developments from the direction of Trump, Turkey's Recep Tayyip Erdogan, Saudi Arabia and Iran - have posed some serious questions about Netanyahu's conduct in recent years.

He put all his eggs in one basket – Trump - and as a result has lost both the Democratic Party and U.S. Jewry at the same time. Netanyahu's gambit has failed.

Trump is becoming unreliable and Iran is getting stronger as a result, despite the sanctions imposed on it.

Saudi Arabia grows more and more distant, the U.S. is becomign isolationist, and Putin, who holds most of the cards in this newly emerging regional order, can afford to take Netanyahu a little less seriously.

We stand at a strategic crossroads – let's hope Netanyahu, "the magician", can succeed in reducing the damage done to Israel, but considering the gambles he had taken so far, I doubt he is the man who is able to get us out of this crisis.