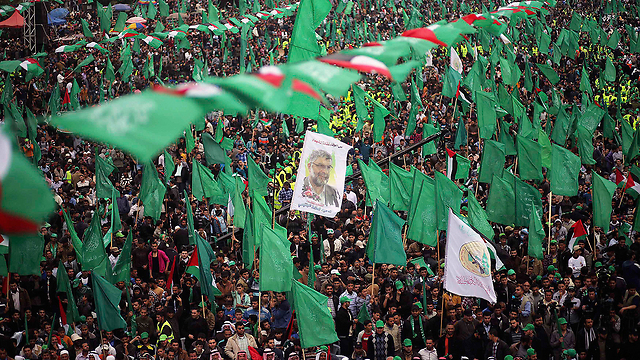 Israel's situation has worsened under Netanyahu

Opinion: Tehran is a clear and credible threat, which has only increased under the PM; there were no Iranians in Syria when he took office, now there are; when he started his tenure, the Gaza leadership was weak, now it has missiles to strike Tel Aviv

Prime Minister Benjamin Netanyahu recently pointed out that the Iranian problem is an immediate threat.

It is not clear how much this has to do with the current political turmoil, but Iran is indeed a clear and credible threat, and it has only worsened during Netanyahu's tenure. There were no Iranians in Syria when he entered office, now there are.

Similarly, when Netanyahu started his tenure, the leadership in Gaza was weak and only possessed missiles whose range couldn't reach the center of the country, even as Israel's Iron Dome air defense system was already in operation.

Yet since then Hamas has worryingly increased its strength, its missile arsenal has grown and now treach Tel Aviv, Ben-Gurion Airport and even further.

Furthermore, Netanyahu has done everything in his power to facilitate this increase in strength.

Releasing over a thousand terrorists in exchange for a single Israeli captive, handing over "protection money" to Hamas and letting both Hamas and the Islamic Jihad fire more than 500 missiles at Israel with no real response.

Netanyahu has also weakened Palestinian President Mahmoud Abbas in the West Bank, keeping him and the growing terrorist regime in Gaza separated.

Now Iran has in its grasp several ways to strike at us: from the Gaza Strip, with help from Hamas and the Islamic Jihad, from Syria and Lebanon and even from Iraq.

All these locations have Israel within missile strike. This also could be done from Iran itself.

Alongside this, Netanyahu's rule has been marked by a deterioration in Israel's relations with powerful foreign powers.

His frequent trips to Russian President Vladimir Putin and his friendship with U.S. President Donald Trump – a friendship that has turned into a complete dependency at a man we cannot fully trust anymore – could not make up for the various blows we have suffered, in no small part to the Palestinian problem.

The support of the Democratic Party in the U.S. is all but gone, along with support from vast swathes of the American Jewish community and our relationship with Europe, which has its fair share of sensitive spots.

The boycott on Israel, perpetrated by various world organizations, does not seem any closer to ending.

We therefore stand before a multi-faced problem: our diplomatic disadvantage in the world due to the Palestinian issue and an existential problem in the military field with Iran, a very dangerous pair.

The Iranian problem is as of now, unsolvable.

Money for new weaponry and the development of new sophisticated missile defense systems maybe at stake, though monetary resources are limited.

Therefore, we must take care of our diplomatic disadvantages.

First, avoiding provocations such as annexation or calling for it, as was heard from Netanyahu during the elections.

Second, ingreach some sort arrangement with the Palestinians, stopping the policy of strengthening Hamas in Gaza at Abbas' expense.

This arrangement should be reached while Abbas still at the head of the Palestinian leadership.

The solution for Hamas in Gaza is a military one, and the price unfortunately will be high.

Much higher than the one required a decade ago had Netanyahu then kept his promises and toppled the Hamas regime.

The gap between Israel and the Palestinians prevents some sort of a final peace agreement, but an arrangement, at least for the long term, is possible.

This arrangement, if achieved, will open the gates for an overt agreement with the Sunni Muslim nations in the region, denying the Iranians from the singular cause to strike against us.

This will help us diplomatically and put us, in our struggle with Iran, at a much more advantageous position than we are today, thanks to Netanyahu.