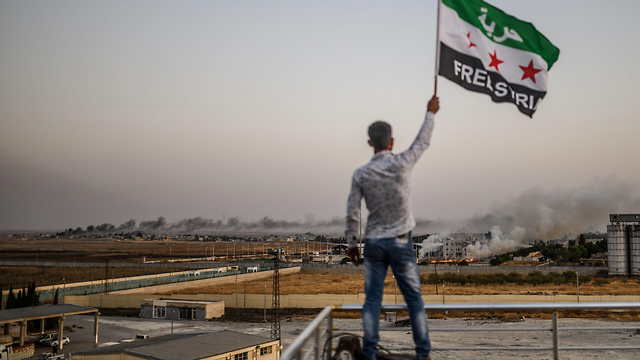 Opinion: While the president's behavior has been shameful, irresponsible and immoral, European leaders have no right to denounce him or his actions while they themselves are unwilling to lift a single finger to help those in Syria

At his recent press conference about the fate of the Kurds in Syria, President Donald Trump had a slip of the tongue that will forever be shamefully etched in the annals of U.S. foreign policy: "Turkey's invasion of Syria is not our problem".

The leaders in Europe and its pundits were quick to condemn Trump's statement, and it's a statement that certainly deserves condemnation, but from the Europeans?

Europe is a several hundred miles away from Syria, while the U.S. is a few thousand. During the civil unrest in Syria, the Assad regime slaughtered half a million citizens, and the various European governments didn't lift a finger to help them.

The use of chemical weapons by the Assad regime went unpunished except a few cruise missile strikes by the U.S. when Trump was first elected.

The U.S. also sent the Syrian rebels a significant number of soldiers and advisors, while no soldiers of any rank were sent by any European forces.

Now that the Trump administration has decided to quickly pull the remaining American troops out of Syria, effectively leaving the Kurdish forces to fend for themselves against the unrelenting Turkish army, Europe has the opportunity to express its moral superiority and directly threaten President Erdogan's regime with military action.

Needless to say, not one single European country took the initiative.

America's Trump went public with what Britain's Boris Johnson, France's Emmanuel Macron, and Germany's Angela Merkel are also doing in practice, and that is nothing to help the Syrian Kurds.

There wasn't even a tweet of a threat of banning Turkey from NATO, and as for economic sanctions - not a chance.

And that is without even mentioning the Turkish minorities in those countries, who passionately hate the Kurds.

There's something very upsetting about watching interviews of British media types condemning Trump but still refraining from asking their heads of government the truly difficult questions.

A few dozen U.S. soldiers and advisors in northern Syria wouldn't have stopped the Turkish invasion.

A joint initiative by NATO led by Europe might have.

The shock expressed by the leaders of Europe over Trump's words and deeds are insolent, immoral, and two-faced.

When a religious war ravaged Yugoslavia in the 1990s, including such crimes as mass murder, a united Europe wasn't willing to sacrifice even one of its soldiers to stop it.

It was all averted only when the American administration of Bill Clinton sent special forces and precise bombers to the area.

But what about Israel? Let's not be hypocritical, a rogue tuna sandwich that poisoned a few people in Tel Aviv  received a whole lot more media coverage than the victims of the Turkish invasion into Kurdish territory.