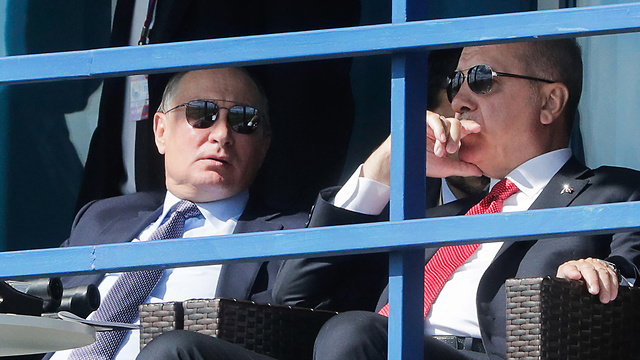 A new and pervasive world order

Opinion: A dark specter clouds the Middle East, central Asia, Europe and America with current events in Syria; when morality and liberalism disintegrate, autocratic forces of nationalism and religion rise

The blood simply keeps flowing. What once seemed like the end of the war in Syria and the defeat of the Islamic State, has suddenly turned on its head.

It is becoming clear the Turkish President Recep Tayyip Erdogan worked over the years to build and arm a jihadist army numbering in the tens of thousands to replace the Islamic State after its defeat to the Kurds.

Erdogan would have not been able to follow on his plan if it weren't for U.S. President Donald Trump – the dangerous of all depraved and unstable kings ruling some of the world's most powerful countries; kings who crept their way into kingship through the cracks of democracy.

It is not a good time to be a subject to the king. We have turned from free citizens to pawns. The horizon is blackening.

The death of Rojava (the de facto autonomous Kurdish region in northern Syria) is a black flag for all those who believe in democracy based on the principles of separation of powers, freedom and liberty.

Trump the American, Putin the Russian, Erdogan the Turk, Bin Salman the Saudi and the Chinese Xi Jinping. These are the new monarchs.

The weakness of western democracy was fully exposed with the election of Trump as president in 2016.

The U.S. saved Europe during World War II and not necessarily for economic reasons, even if it made it the world's greatest superpower for the next 75 years. And what now?

Turkey and Russia have been attacking Europe for over a decade in order to weaken the European Union and the NATO military alliance, so they can invade and plunder the continent piece by piece.

Germany and France work against it, but there is a gnawing at the margins – by terrorist groups, influx of refugees, meddling with elections, distancing the U.S. with help from a paranoid and corrupt president, and installing fear – all work well according to the Turkish-Russian strategy.

When morality and liberalism disintegrate, autocratic forces of nationalism and religion rise. It happened in Hungry, Italy, Romania and Austria. It weakens European connectivity and leaves the continent in the hands of the Russians and the Turks.

Trump's decision to abandon the Kurds to the army of Turkey might stem from his questionable character and his foolishness, but it might also be that Erdogan managed to convince him that this Syrian jihadist force he has raised could halt Iran's influence in Syria.

It's quite possible that the Saudis – big supporters of Islamic Jihad themselves – put in a good word too.

Unfortunately for the Kurds, Trump has a score to settle with the Iranians and with those who stand behind them – the Chinese.

A 'thorn' in China's side. Uyghurs in western China praying. (Photo: gettyimages)

The return of the Islamic State is a dangerous turn of events for China and central Asia, and a Turkish vessel to move eastward.

It could become clear very fast that the American maneuver, based on a cynical trade threat against the Iranians and Chinese, might escalate and fail as it did in the Persian Gulf.

To the determent of the Kurds, it would soon become clear that favoring the Turks and Saudis would end in a bloody failure.

The kings Putin, Trump, Erdogan and Bin Salman are playing chess in Syria.

The Russians have an interest in blocking off Iran as well and don't mind splitting Syria between themselves and Turkey.

This game that began a few days ago is similar to the partition of Poland in the Molotov-Ribbentrop pact between Russia and Germany in 1939.

That pact didn't deal only with land, but also with resources and economies.

But the current agreement smells faintly like Neville Chamberlin in the Munich agreement in 1938, an agreement that sold out the Czechs to the Nazis.

The Kurds are paying for an agreement signed via telephone between kings - pawns in a game for those who fight or broker deals of power with each other.

The weakening of democracy, in part, means that the courts are no longer independent, but do what is asked of them - political trials.

At the same time, the police are arresting dissents, newspapers praise the leader and parliaments legislate draconian laws.

This is a time when a young Israeli woman with less than a third of an ounce of hashish is arrested in Moscow while in transit at an airport and sentenced to seven years in prison.

A helpless pawn in a dangerous game. Naama Isschar.

All of this because King Putin wants back a blogger who was supposed to be extradited to King Trump by his vassal Prime Minister Benjamin Netanyahu in exchange for the hostage.

As long as Trump is president – there will be no peace and security.

It is time to pray we make it through and that someone who has liberal democracy in their bones and a moral backbone will return to the White House or the future will hold no change.

Tsur Shezaf is a writer and journalist, author of the book "Daash, A Journey to Satan's Doorstep